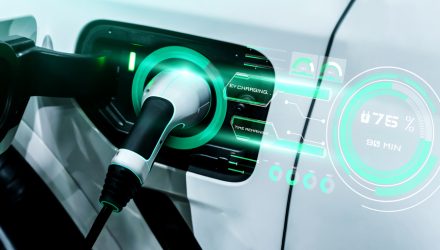 Call on CLNR as Important Juncture Nears for Electric Vehicles

Investors who have long followed the electric vehicle industry know that central to this investment thesis is adoption, and that translates to how many EVs manufacturers sell.

Market participants also hear plenty about EV “tipping points” and the relevance of such junctures to equities and exchange traded funds such as the IQ Cleaner Transport ETF (CLNR). Investors considering CLNR have some compelling data to evaluate.

Electric vehicle sales now represent 5% of new car sales in the U.S., the world’s largest automotive market. This percentage of total sales is widely viewed as the “tipping point” from which EV adoption can broadly accelerate.

“For the past six months, the US joined Europe and China — collectively the three largest car markets — in moving beyond the 5% tipping point. If the US follows the trend established by 18 countries that came before it, a quarter of new car sales could be electric by the end of 2025. That would be a year or two ahead of most major forecasts,” reported Tom Randall for Bloomberg.

Accelerating adoption of electric vehicles is relevant to CLNR on multiple fronts. Three of CLNR’s top 10 holdings are vehicle manufacturers, but there’s more to the ETF’s story. The fund is deep relative to rivals in this still-young category and has breadth beyond car makers to capitalize on the complexities of the broader electric vehicle ecosystem.

Those are favorable traits because with more countries closing in on the aforementioned 5% tipping point, demand for EVs and the components needed to power those vehicles could sharply accelerate in the coming years, potentially benefiting CLNR along the way.

“It makes sense that countries around the world would follow similar patterns of EV adoption. Most impediments are universal: there aren’t enough public chargers, the cars are expensive and in limited supply, buyers don’t know much about them. Once the road has been paved for the first 5%, the masses soon follow,” according to Bloomberg.

Impressively, 15 countries already have double-digit sales rates for EVs. That group includes China and 14 European countries, including Germany and France, the Eurozone’s two largest economies. That’s a sign that some CLNR components need to step up their production games.

“Continued growth also depends on the ability of automakers and their suppliers to increase production fast enough. Volkswagen, Ford, and BMW are each targeting 50% or more of their global sales to be fully electric by the end of the decade,” concluded Bloomberg.