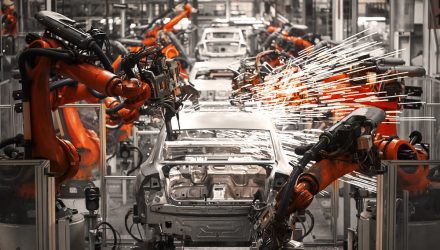 That debate makes sense. After all, Tesla is the dominant maker of electric vehicles. In theory, it should be a “no brainer” inclusion in any number of ESG benchmarks and exchange traded funds.

As a result, many advisors and ESG-inclined investors are pondering the ESG credentials of traditional automotive manufacturers — many of which are bolstering electric vehicle offerings. Those include German auto giants BMW and Volkswagen.

BMW and Volkswagen are two of the biggest auto manufacturers in the world, meaning both companies have the scale to be players in the growing electric vehicle arena. Both stocks reside in some ESG ETFs, including the IQ Candriam ESG International Equity ETF (IQSI).

The $201.6 million IQSI, which turns three years old in December, follows the IQ Candriam ESG International Equity Index. The benchmark is designed to deliver to ex-U.S. large- and mid-cap stocks with favorable ESG traits. Under the Candriam methodology, several traditional automotive manufacturers, including BMW and Volkswagen, make the cut for admission into IQSI.

A notable point about the inclusion of old guard auto companies in the ESG ETF conversion is that these companies have potential product governance risk, and as Volkswagen’s diesel emissions cheating scandal in 2015 proves, ethics risk is a concern, too. Still, companies that made their marks by producing internal combustion engine vehicles are changing and gaining some ESG credibility.

Volkswagen “is transitioning to zero-emission electric vehicles from GHG emitting internal combustion engines. While the company currently sells EVs, ICE vehicles will likely still be sold to consumers for at least the next decade,” according to Morningstar.

Volkswagen’s brand portfolio is expansive and includes Audi and Porsche, among others, indicating that the company has more than enough levers to pull to expand electric vehicle production, particularly in the aspirational, luxury end of the auto market.

The same is true of BMW, which some analysts view as a deeply discounted name among large-cap auto stocks.

“The company’s focus on ultraluxury, luxury, and premium segments, with an obsessive attention to details that impresses its target clientele, has enabled BMW to generate substantial excess returns over its weighted average cost of capital. Since 2002, on average, the company’s returns exceeded its cost of capital by roughly 8 percentage points, an outstanding performance for an automotive manufacturer,” added Morningstar.