You are at:Home»Equity ETFs»Dow Up Over 150 Points on Positive U.S.-China Trade Talks 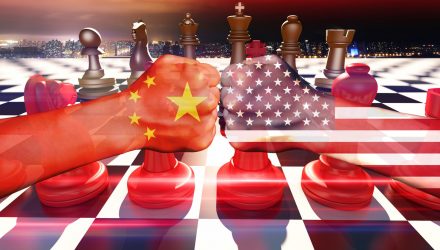 Dow Up Over 150 Points on Positive U.S.-China Trade Talks

U.S. equities started November on a positive note with the Dow Jones Industrial Average gaining over 150 points as United States-China trade talks progressed. The Dow built off yesterday’s positive end to an October that roiled the capital markets with heavy downpours of volatility.

U.S. President Donald Trump tweeted on Thursday that he “just had a long and very good conversation with President Xi Jinping of China,” signaling that trade negotiations with the second largest economy are moving forward positively. President Trump also mentioned that continued discussions will take place at the G-20 Summit

October will be a memorable month for stocks after an extended bull run the last 10 years. However, some market experts are hesitant to say that the coast is clear in terms of volatility.

“As pleasant as the last two sessions have been to experience they do not by themselves indicate that the worst is over,” said Michael Shaoul, chairman and CEO of Marketfield Asset Management. “All we can say so far is that Monday’s accelerated drop lower found good support for the S&P 500 just above 2,600, and any subsequent retest should at least struggle to penetrate this level.”