You are at:Home»Equity ETFs»Dow Jumps Over 300 Points as Retail and Tech Rally 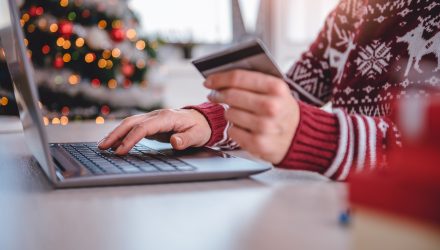 Dow Jumps Over 300 Points as Retail and Tech Rally

The Dow Jones Industrial Average jumped over 300 points Monday as the technology sector rebounded from losses last week, while retail got an early boost from Black Friday holiday shopping.

Both the S&P 500 and Nasdaq Composite were in the green over 30 points and 100 points, respectively. Financial names like American Express and Goldman Sachs propped up the S&P 500, while FANG (Facebook, Amazon, Netflix, and Google-Alphabet) stocks recouped losses from last week’s volatility, particularly in the tech sector, despite a shortened Thanksgiving week.

Shoring up the retail sector was a strong showing for holiday shoppers on Black Friday as online sales reached a record total of $6.22 billion based on data from Adobe Analytics. Retail could get a further boost as Cyber Monday is in full swing with online retail exchange-traded funds (ETFs) like the Amplify Online Retail ETF (NasdaqGM: IBUY) and SPDR S&P Retail ETF (NYSEArca: XRT) could stand to benefit.

“At a high level, we believe Black Friday week was a success, one that should give investors a little more confidence as we move deeper into holiday,” said Wells Fargo analysts, who also noted that last week’s Black Friday has been the strongest since 2013. “On top of the solid traffic, what we found to be equally as compelling was a fairly consistent pricing cadence during (Black Friday week).”

U.S. equities returned after coming off their worst Thanksgiving week since 2011 as the tech sector continued their sell-offs that reached a fever pitch in October. Investor fears of excess supply and low demand also depressed oil prices last week, but they rebounded on Monday as U.S. West Texas Intermediate traded and Brent Crude both increased by about 3%.

Some analysts were quick to dismiss last week’s losses as standard fare as the markets continue their reconciliation process.