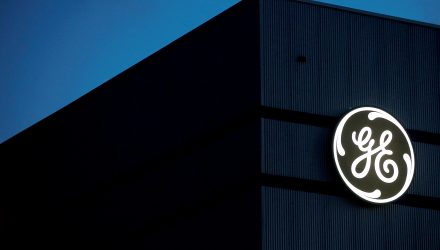 After ranking as the worst-performing member of the blue-chip index last year, General Electric Co. (NYSE: GE) is down nearly 8% year-to-date, bringing its 12-month loss to about 46%. That makes the stocks vulnerable to removal from the Dow, according to at least one analyst.

We believe the chances that GE could be removed from the Dow are increasing as GE continues to face substantial challenges including earnings and cash pressure, tough global power generation markets, aggressive downsizing, shrinking its portfolio, management shake-up and SEC investigations,” Deutsche Bank analyst John Inch wrote Wednesday, reports CNBC. “Apart from GE’s other challenges, as the company’s absolute share price has continued to drop, GE increasingly falls into the category of outlier and consequently a likely candidate for removal.”

The Dow is a price-weighted index, a methodology reflected in DIA. That means the stock with the highest price tag in the Dow, in this case Boeing Co. (NYSE:BA), receives the largest weight in the index. Conversely, the stock with the lowest price tag, that being General Electric, is the Dow’s smallest component.

Other Dow ETFs include the the Guggenheim Dow Jones Industrial Average Dividend ETF (NYSEArca: DJD), which weighs the 30 Dow stocks by yield. DJD, which tracks the DJIA Yield Weighted Index, allocates 2.9 percent of its weight to GE.