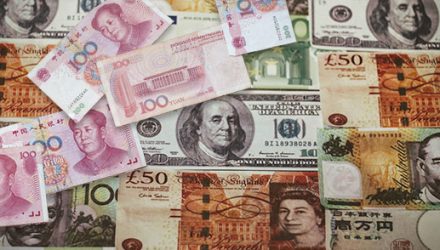 Don’t Blame the Pandemic for the $277 Trillion Debt Pile

How do you even begin to visualize $277 trillion?

If we convert it into seconds, 277 trillion is the equivalent of 8.8 million years. I’m not sure what was happening that long ago, but I guarantee you it didn’t involve people.

You get the point. It’s an unfathomable sum.

It’s also the total amount of debt the world is expected to hit by year-end. That’s according to the Institute of International Finance (IIF), whose members include some 400 banks and financial firms around the globe.

This year alone, as of the end of September, the world added $15 trillion to the debt pile, with government borrowing accounting for half of the increase, the IIF says. Debt in developed markets is set to hit 432% of gross domestic product (GDP). For emerging markets, it’s closer to 250%.

So how did we get here, and what can investors do to protect their own wealth?

As you may expect, the economic fallout from the pandemic has dealt a huge blow to government coffers. So far in 2020, the U.S. has added more than $4.8 trillion to the federal debt, the most ever for a single year. 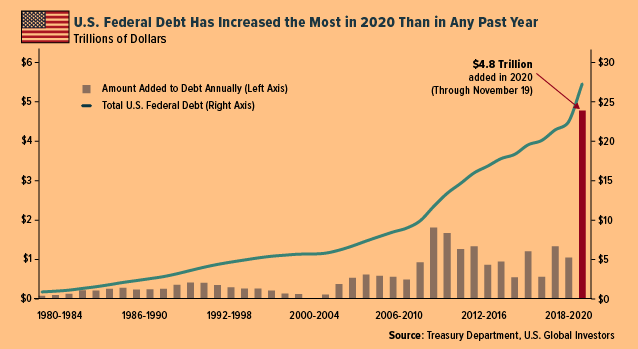 We can’t blame everything on the pandemic. According to the IIF, the past four years have seen the largest debt buildup on record, with $52 trillion accumulated since 2016.

What this means is that, even during the pre-pandemic economic boom years, governments were not practicing sound fiscal management. Granted, governments weren’t the only contributors to the debt buildup, but they represent a huge part of it.

Knowing this, there’s no way we can reasonably expect them to get us out of this mess.

“There is significant uncertainty about how the global economy can deleverage in the future without significant adverse implications for economic activity,” IIF economists say.

Jared Dillian: Gold Is A Hedge Against Bad Government Decisions

In the article, titled “Gold Is a Hedge Against Bad Government Decisions,” Dillian argues that investors mistakenly believe that gold is a hedge against inflation and stock market crashes.

Instead, he writes, gold “is a hedge on policymakers screwing up, and there has been a lot of screwing up in the last 20 years.”

Since the year 2000, U.S.-denominated gold has surged roughly 555% versus 146% for the S&P 500 Index. The reason for this, according to Dillian, is that “significantly looser financial conditions” have meant that there are “no constraints on monetary and fiscal policy.”

Indeed, the world is stuck in a low-rate environment. As of right now, no 10-year government bond in any major economy in Europe or North America has a yield higher than 1%. Several countries—including France, Germany, Sweden, the Netherlands and Switzerland—issue debt with a negative yield. And that’s the nominal yield, before factoring in inflation.

On Friday, in fact, the amount of government debt around the world trading with a negative yield rose to $17.1 trillion, a troubling new record.

Currency devaluation is real, and it’s only likely to accelerate. If you’re seeking to protect your family’s wealth against the failures of governments and central banks, I don’t believe there’s a more prudent option than hard assets. That includes not just gold and precious metals but also real estate, housing and, if you can stand the volatility, cryptocurrencies such as Bitcoin and Ethereum.

Cryptos at a Nearly Three-Year High

Speaking of which, Bitcoin has been on a tear this year, having climbed almost 160%. On Friday, the world’s largest digital currency by market cap traded above $18,000, hitting its highest for the first time since December 2017. Ethereum, meanwhile, broke above $500, its highest level since June 2018.

The difference between then and now is that, whereas the 2017 Bitcoin rally was highly speculative and retail-driven, today’s surge appears to be propelled by smart money seeking to hedge against the things we just talked about.

That’s the assessment of ex-hedge fund manager Mike Novogratz. Speaking to CNBC last week, Novogratz said he believes Bitcoin has “hit escape velocity” as the cryptocurrency enjoys increasingly greater demand from institutional investors. He has an end-of-year price target of $20,000 and sees $60,000 by the end of 2021.

Emerging Markets to Outperform in 2021?

For what it’s worth, other fund managers aren’t in agreement with Novogratz. Less than 5% of those surveyed by Bank of America believe Bitcoin will outperform next year. Meanwhile, close to half of managers say they believe emerging markets are the place to be heading into 2021, ahead of the S&P 500, oil and gold.

Investors are betting that a vaccine against COVID-19 could benefit emerging economies the most. A weaker U.S. dollar may also make emerging markets more competitive. The U.S. Dollar Index is down more than 3% year-to-date.

Did You Miss the Mining Expo?

If you were one of the many people who attended our recent Virtual Junior Mining Expo, thank you! The virtual event, co-hosted by StreetSmart Live!, was a huge success, bringing 10 of the most exciting junior metal producers to curious investors such as yourself.

For those of you who missed it or want to watch it again, a recording is now available. Just click here!

The S&P 500 Stock Index is a widely recognized capitalization-weighted index of 500 common stock prices in U.S. companies. The U.S. dollar index (USDX) is a measure of the value of the U.S. dollar relative to the value of a basket of currencies of the majority of the U.S.’s most significant trading partners. Bloomberg Barclays Global Aggregate Negative Yielding Debt Index represents the negative yielding segment of the global investment grade debt from twenty-four local currency markets. This multi-currency benchmark includes treasury, government-related, corporate and securitized fixed-rate bonds from both developed and emerging markets issuers.