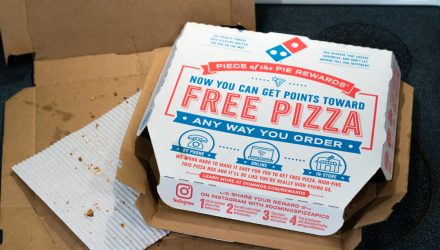 Domino’s Pizza shares jumped after reporting that its U.S. same-store sales climbed 3.5% in the second quarter, despite tough comparisons to its elevated sales during coronavirus lockdowns last year, CNBC reports.

In the United States, Domino’s revealed positive same-store sales growth. On a two-year basis, U.S. same-store sales increased 19.6% for the second quarter. Executives attributed to the high sales to customers spending more on orders, notably from purchases with more food items, a “modest” menu price hike and a higher delivery fee. Additionally, Domino’s, along with other large pizza chains, is taking a greater market share away from independent pizzerias.

“You’ve often asked if our sales growth might be weaker in markets that have more fully reopened, but to the contrary, the opposite trend emerged through the second quarter, where we saw higher levels of sales growth in the second quarter in the markets with fewer Covid-related restrictions,” CEO Ritch Allison told analysts.

Allison, though, warned that staffing remains a major hurdle in opening more stores. Additionally, Domino’s is still stuck with construction and permitting delays due to delays from the pandemic, along with problems due to equipment shortages from the ongoing supply chain interruptions.

Meanwhile, Chipotle has maintained its momentum after reporting its own second quarter results Tuesday afternoon, which beat analysts’ expectations as well.