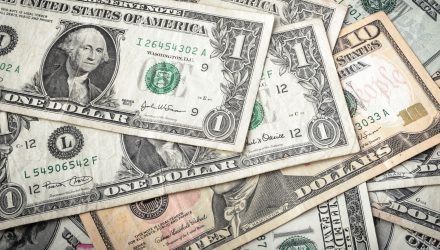 Dollar’s Gains Could be Limited From Here

The Invesco DB U.S. Dollar Index Bullish Fund (NYSEArca: UUP), which tracks the USD’s movements against a basket of major developed currencies, is up 5.6% year-to-date, making it one of the best-performing currency exchange traded funds.

“The dollar index has soared around 8 percent since its February low, but I believe we’ve seen the top for 2018. A few factors are at play here, including the euro’s recent trading pattern and the Federal Reserve’s hiking path,” reports CNBC.

Waiting On The Fed

Predictably, the Federal Reserve could have a significant impact on the dollar. Bond market participants widely expect the Fed to raise interest rate at its September meeting and again in December. The Fed has already boosted borrowing costs twice this year.

“Finally, the Federal Reserve has already priced in two more hikes this year and three next year. This brings a proverbial ceiling to how much more hawkish it could become,” according to CNBC. “If global uncertainties clear up, we envision other major central banks will make larger strides down a hawkish path relative to what the Fed could do. This would weaken the dollar in a manner, similar to last May, under the same circumstances.”

Traders considering a bearish position on the dollar capitalized on the weakness with the PowerShares DB US Dollar Index Bearish (NYSEArca: UDN), the direct inverse play against UUP.