You are at:Home»Dividend Channel»New Tax Proposal Could Boost Allure of Dividends 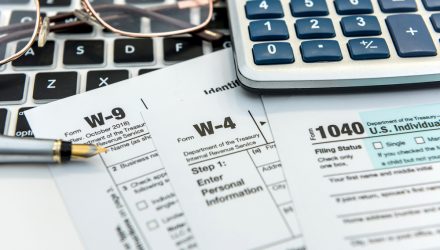 Once again, tax talk is front and center on Capitol Hill. The Biden Administration wants to raise income and capital gains taxes on individuals making more than $400,000 a year and couples making north of $450,000.

Many taxpayers aren’t in those brackets, and it remains to be seen if there’s enough congressional support to get these efforts across the finish line and to the president’s desk. Perhaps more notable to all investors is a recent proposal by Sen. Ron Wyden (D-OR) and Sen. Sherrod Brown (D-OH) that seeks to levy a 2% excise tax on share repurchase plans.

“And so if a company bought back shares, except for the purpose of an employee retirement plan or employee stock compensation, they would pay a 2% excise tax. So if a firm bought back a $1 billion of its stock, it would pay a $20 million excise tax on that transaction,” says David Harrell, editorial director at Morningstar Investment Management.

Broadly speaking, a 2% tax may not be enough to dissuade some large, cash-rich companies from buyback plans. However, there’s a long-running debate between buybacks and dividends, and when it comes to corporate taxes, companies usually like dividends because the shareholder pays the taxes. Buybacks are useful for reducing shares outstanding counts, thereby boosting per share earnings.

“If you look at the press release that went out with a proposal last week, they were pretty explicit in that they were trying to affect corporate behavior but not to increase dividends but to try to encourage companies to instead of using that cash for buybacks to reinvest it in themselves and their workers,” adds Harrell.

Currently, the Wyden/Brown plan is light on details, and with the White House pushing for other tax hikes, the buyback proposal could be pushed out to another time. With 2022 being a mid-term election year, politicians from either party might not be quick to push for tax increases on companies, some of which are donors to their campaigns.

Conversely, if the buyback levy eventually does come to fruition, some companies could simply cut or halt repurchase plans and keep investors satisfied by raising dividends, allowing shareholders to pick up the tax bill.

More emphasis on dividends could be a plus for exchange traded funds, such as the SmartETFs Dividend Builder ETF (DIVS). As it is, DIVS is up 9% since April, proving to investors that the fund is benefiting as global dividend growth resumes and approaches pre-pandemic levels.