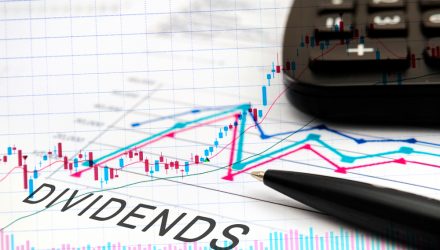 In an Unreliable Market, Dividend ETFs Remain a Steady Ballast

While the markets have been weighed down by uncertainty, investors could find some stability in dividend-themed exchange traded funds.

Dividend payments have set another record in the second quarter, with S&P 500 companies paying out a record $140.6 billion in dividends over the last three months, the Wall Street Journal reported.

In comparison, S&P 500 companies paid out $137.6 billion in dividends for the first three months of the year and $123.4 billion in the same quarter last year.

Annual dividend yields have also reached new highs every year for a decade, excluding a slight dip in 2020.

Howard Silverblatt, a senior index analyst at S&P Dow Jones Indices, projected that dividends will continue to set new records for the current quarter and the year as well.

Silverblatt argued that dividend payments for the year are projected to expand at a faster than expected pace due to strong sales and companies trying to return value to shareholders. Looking ahead, he estimated that dividend payments could surge more than 10% in 2022 from last year’s record $511.2 billion, which could potentially mark the first double-digit rise since 2014.

“Businesses want to send a message to investors that they are in good health,” Brian Jacobsen, senior investment strategist at Allspring Global Investments, told Reuters. “If they can maintain their dividends and grow their dividends, despite the challenges, that tends to signal that they’re confident about their business outlook.”

Dividend-paying companies that are capable of raising dividends are typically on a more stable footing with a record of strong profits. These companies are also those found in sectors like utilities, telecommunications, and consumer staples, which consumers rely upon regardless of the current economic environment.

Investors can also target U.S. dividend-growers through several ETF options. For instance, the iShares Core Dividend Growth ETF (DGRO) specifically targets companies that pay a qualified dividend. These firms must have at least five years of uninterrupted annual dividend growth and an earnings payout ratio of less than 75%.

The ProShares S&P 500 Aristocrats ETF (NOBL) only targets S&P 500 companies that have increased their dividends for at least 25 consecutive years.

The Vanguard Dividend Appreciation ETF (VIG), the largest dividend-related ETF on the market, tracks U.S. stocks that have increased dividends regularly for at least 10 consecutive years.

The Schwab US Dividend Equity ETF (SCHD) includes 100 stocks based on strong fundamentals, such as cash flow to debt, return on equity, dividend yield, and consistent dividend payouts for at least 10 consecutive years.

The SPDR S&P Dividend ETF (SDY) holds firms that have a minimum dividend increase streak of 20 years. Moreover, SDY follows a yield-weighting methodology that allocates a larger weight toward those with higher yields, so the portfolio leans toward mid-sized companies.

The WisdomTree U.S. Quality Dividend Growth Fund (DGRW) includes companies with high long-term earnings growth forecasts for the next three to five years and weights components based on the value of dividends they are expected to pay over the next year.