You are at:Home»Dividend Channel»As Clean Energy Rebounds, Check Out SOLR 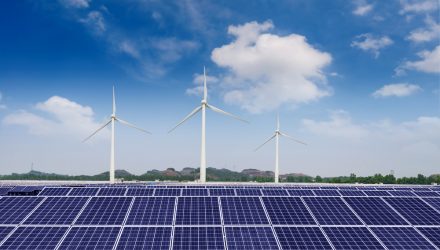 Clean energy has rebounded as a top priority as European countries look to aggressively expand their clean energy capacity to reduce reliance on Russian fossil fuels.

Investors looking to add exposure to the quickly growing industry may consider the SmartETFs Sustainable Energy II ETF (SOLR), which invests in companies that believe in providing or supporting alternative or renewable energy sources, or those that produce, generate, transport, deliver, or extend energy applications to make alternative or renewable energy more efficient or accessible, according to SmartETFs.

SOLR is up 6.97% over a one-month period, according to VettaFi, due to recent tailwinds for the industry.

A significant tailwind for the space is the acceleration of EV and clean energy adoption.

Data released in March suggest that 20% of all passenger vehicles sold in Europe and China in February were sold with an electric plug, according to SmartETFs, equating to 290,000 new battery electric vehicles (BEVs) and plug-in hybrid electric vehicles (PHEVs) arriving on the roads in China and 160,000 in Europe.

According to a study released in March by energy think-tank Ember, 2021 was the first year that clean energy produced more of the world’s electricity than coal. Solar, wind, hydro, nuclear, and bioenergy generated a total of 38% of the world’s electricity last year compared to 36% generated by coal power. Solar and wind were the fastest-growing sources of clean energy, jumping 23% and 14% respectively, according to SmartETFs.

EU member states agreed in mid-March to impose a carbon tax on products imported to the EU which do not meet EU climate standards in their production. According to SmartETFs, the agreement follows the proposal by the European Commission in July 2021 for a Carbon Border Adjustment Mechanism (CBAM), placing a carbon price on targeted products to avoid outsourcing production to countries with looser climate standards. The proposed rules would see the system slowly phased in before becoming fully operational in 2026.

Additionally, the EU’s RePower Europe plan released at the start of March includes the ambition to install 10 million heat pumps over 2021–2025. The EU is aiming to achieve 30 million cumulative heat pump installations by 2030, according to SmartETFs.