You are at:Home»Dividend Channel»Allure of Asia Dividends Is Growing Stronger 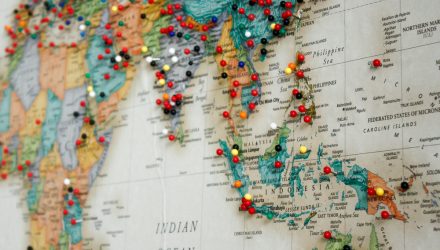 The recent deluge of impressive dividend data has a distinctly global feel, and that’s a positive for investors looking to add income and international diversification to their portfolios in one fell swoop.

The Guinness Atkinson SmartETFs Asia Pacific Dividend Builder (ADIV) is a potentially alluring idea for investors looking to mix developed and emerging markets while embracing a regional fund. ADIV is also worth examining because the third-quarter reading of the Janus Henderson Global Dividend Index shows that Asian dividends are taking off.

The headline reading for payouts in the Asia ex-Japan checked in at growth of nearly 38%, according to the index. The ex-Japan qualifier is relevant to investors considering ADIV because the fund excludes Japanese stocks.

“The picture in Asia was positive overall, but there was a wide divergence from one country to another,” according to Janus Henderson. “Overall, eight companies in ten increased their dividends or held them steady and the regional total jumped by over a quarter on an underlying basis.”

Australia is a major contributor to Asia ex-Japan payout growth this year, and that’s a positive for ADIV investors because the country is the ETF’s third-largest geographic exposure at 12%.

“Australia stood out significantly; with underlying growth of 97%, it fared better than any other developed country and more than doubled its headline total (+131%),” adds Janus Henderson. “Banks also contributed to the growth seen in Australia, more than doubling how much they paid to shareholders as restrictions on dividends were lifted by the regulator.”

Banks from a variety of Asian nations combine for 15% of ADIV’s weight — the ETF’s largest sector exposure.

“Elsewhere in Asia, the relaxation of restrictions on banking dividends boosted payouts in Singapore, while in South Korea, mining company Posco made a big increase and Hyundai restarted distributions. Both countries saw payouts jump by over a quarter,” according to the research.

Singapore and South Korea combine for 18% of the ADIV roster. Earlier this year, Singapore regulators uncuffed banks, allowing those companies to boost payouts. Regarding South Korea, that’s a high-quality market dominated by cash-rich conglomerates and tech companies that are only just scratching the surface of shareholder rewards potential.

Add to that, the third quarter is usually the prime time of year for China dividends, and that was the case again this year with payouts there rising 15.7%. China is ADIV’s largest country weight at 31%.