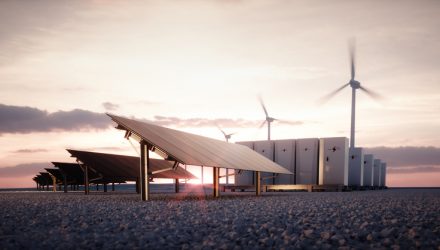 Why This Alternative Energy ETF Could Shine Again in 2020

In what was a banner for alternative energy ETFs in 2019, the ALPS Clean Energy ETF (ACES) was one of the best, posting an annual gain of more than 50%.

Buoyed by double-digit growth rates in global solar installations over the next decade, ACES, with a substantial solar weight, could be a long-term winner.

“The expected 142 gigawatts are seven times that of the entire capacity that had been installed by the start of the prior decade (20 GW in 2010),” said IHS Markit in a recent note. “The growth has been substantial in terms of geographic reach as well. There were 7 countries with more than 1 GW of installed capacity in 2010, most of them confined to Europe. IHS Markit expects more than 43 countries to meet that threshold by the end of 2020.”

ACES takes a different approach than what is seen in other traditional clean energy ETFs. Many of the legacy funds in this space focus on one alternative energy concept, such as solar or wind power. Not surprisingly, China will be a major driver of solar adoption.

“Large markets such as China will continue to have an outsized share of new installations into the foreseeable future,” notes Markit. “However, the overreliance on China for global solar installation growth will continue to decrease in the coming years as more capacity is added elsewhere. Installations outside of China, the world’s leading market, grew by as much as 53% in 2019 and are expected to continue growing by double digits in 2020. Overall, the top 10 solar markets are expected to see their collective share of the market fall to 73 %, down from 94% in 2010.”

Fortunately, ACES has ample domestic exposure, levering it increased consumption of alternative energy, including solar, in the U.S.

“Installations are expected to grow 20% in 2020, consolidating the United States’ position as the world’s second-largest market. California, Texas, Florida, North Carolina, and New York will be key drivers of U.S. demand growth over the next five years,” according to Markit.