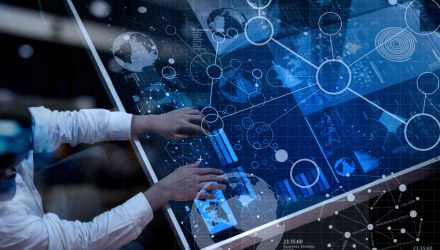 Why Moore’s Law Matter With This Active Tech ETF

Artificial intelligence (AI) and related technologies are proliferating at a rapid, which is impactful for the ARK Innovation ETF (NYSEArca: ARKK). Also benefiting the actively managed ARKK is the rate at which AI training costs are declining.

“The cost to train an artificial intelligence (AI) system is improving at 50x the pace of Moore’s Law,” said ARK analyst James Wang in recent note. “For many use cases, the cost to run an AI inference system has collapsed to almost nil. After just five years of development, deep learning – the modern incarnation of AI – seems to have reached a tipping point in both cost and performance, paving the way for widespread adoption during the next decade.”

The proliferation of artificial intelligence and robotics will only reach greater levels, especially as the cost to implement this disruptive technology falls.

“During the past decade, the computing resources devoted to AI training models have exploded,” writes Wang. “After doubling every two years from 1960 to 2010, AI compute complexity has soared 10x every year, as shown below.”

What makes ARKK increasingly relevant in today’s investing landscape is that it features a harmonious approach to accessing automation and innovation whereas some rival funds emphasize one, but not both of those concepts. Additionally, automation often gets a bum rap because it’s seen as a jobs killer, but the opposite could prove true over time.

“We believe that companies have had ample incentive to increase computing resources at five times the rate of Moore’s Law: significant competitive advantages in revenue generation and hardware cost declines rapid enough to keep fueling the beast,” according to Wang. “As so-called hyperscale internet companies have taken the reins from universities and trained deep learning networks on their data, they have budgeted hundreds of millions of dollars for AI hardware, expecting superior rates of return on investment over time.”