You are at:Home»Disruptive Technology Channel»Vertical Integration Could Be A Big Driver for This ETF 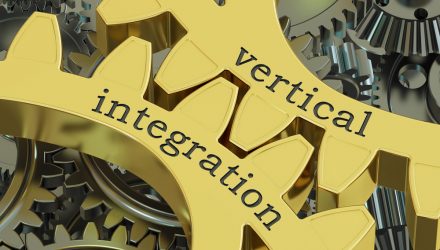 Vertical Integration Could Be A Big Driver for This ETF

Among internet ETFs, the ARK Web x.0 ETF (NYSEArca: ARKW) is superior in its ability to deliver to investors exposure to lucrative, fast-growing themes that many of its traditional rivals overlook.

Known are ARKW’s exposure to e-commerce, streaming entertainment, and its large weight to Tesla, among other favorable attributes, but there’s more to the story, including its leverage to the next generation of software updates and delivery and reductions in load times.

“Square cut the time to process a chip card transaction from 4.2 to 2 seconds; Roku lowered channel load times by 30%; Apple accelerated Face ID recognition time in its iOS 13 release by 30%; and Tesla, which reduced the time for the Model 3 to accelerate from 0-60mph from 3.2 to 2.8 seconds,” said ARK analyst George Whitridge in a recent note.

Tesla and Square are ARKW’s top two holdings, combining for over 18% of the fund’s roster. The ability to vertically integrate hardware and software, is something Square, Tesla, and Apple – another ARKW holding – are becoming proficient at, helping these companies add scale in fast-growing markets.

“As used product markets evolve and become more robust, financial analysts are likely to focus less on units sold and more on active users and the incremental recurring revenue derived from new services,” notes Whitridge. “From 2012 to 2018, for example, after nearly doubling the number of iPhone users from 490 million to 900 million, Apple quadrupled its revenues from services in the App Store, Apple Pay, iCloud, Apple Music, Apple TV Plus, Apple Arcade, and Apple News Plus.”

Tesla is a prime example of hardware and software integration, a capability that could be an increasingly important revenue driver for the electric vehicle maker.

“After vertically integrating hardware and software, companies can offer additional services that generate more revenue at higher margins,” writes Whitridge. “In 14 months, for example, Tesla enhanced the performance and functionality of the Model 3 with 14 WiFi-enabled software updates.”