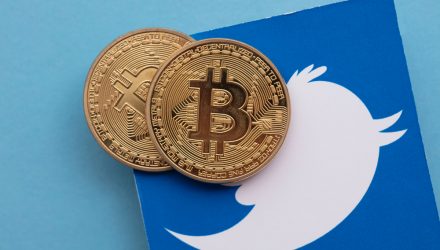 San Francisco-based Twitter has previously floated crypto-related ideas, but the formation of Twitter Crypto is a meaningful expression of the company’s intent to become a blockchain/crypto player. It could also be relevant to some exchange traded funds, including the ARK Next Generation Internet ETF (NYSEArca: ARKW).

“Twitter Crypto will underpin all of this work, and serve as a ‘center of excellence’ for all things blockchain at Twitter. We’ll be hiring for roles in engineering and product,” said Tess Rinearson in a Wednesday tweet.

Rinearson is joining Twitter Crypto “to lead a new team focused on crypto, blockchains, and other decentralized technologies—including and going beyond cryptocurrencies.”

Twitter’s foray into crypto isn’t surprising. CEO Jack Dorsey is also at the helm of Square (NYSE:SQ), one of the fintech companies with significant bitcoin exposure. Dorsey himself is a noted bitcoin supporter.

Twitter’s crypto move is obviously compelling because it brings brand recognition to a still-young asset class, but there’s more to the story. Twitter has the capabilities and scale to probe emerging areas of crypto and perhaps serve as a vessel for increasing adoption of the asset class.

As for relevance to ARKW, the ARK Investment Management fund allocates almost 5% of its weight to the social media stock, and the name is the fifth-largest holding in the actively managed ARKW, according to issuer data.

While ARKW is framed as a next-generation internet ETF, it’s more versatile than simply holding pure-play internet equities. In fact, its crypto exposure goes well beyond Twitter. The ARK fund allocates 6.8% of its weight to crypto exchange operator Coinbase (NASDAQ:COIN), and its second-largest holding is the Grayscale Bitcoin Trust (GBTC).

Other ARKW components with crypto exposure include Square and Robinhood (NASDAQ:HOOD), among others.