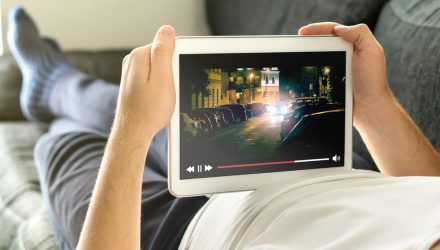 Tune Into Streaming Entertainment Disruption With This ETF

Streaming entertainment is widely viewed as one of the disruptive technologies benefiting from the shelter-in-place orders being imposed as a result of the coronavirus and while there isn’t a dedicated streaming ETF, the ARK Web x.0 ETF (NYSEArca: ARKW) is a pretty good proxy.

Thanks to the likes of Netflix, Amazon.com Inc. (NASDAQ: AMZN), Roku (NYSE: ROKU) and others, the streaming space is becoming increasingly competitive and that competition spotlights the utility of a fund such as ARKW, which helps investors avoid stock picking on their own.

As an industry, streaming is still in its formative stages and is on the cusp of potentially exponential growth over the next several years.

“According to our research, streaming revenue should more than quadruple during the next five years, from $86 billion today to $390 billion in 2024,” notes ARK.

What makes ARKW a more compelling option than passively managed funds is that with the benefit of active management, the fund goes beyond prosaic fares, such as Alphabet, Amazon, and Facebook. For example, Tesla is ARKW’s top holding and the fund features exposure to the likes of Square and Roku, stocks not often found for size in traditional internet ETFs. Roku, ARKW’s third-largest holding, could be a significant driver of the fund’s upside potential due to the burgeoning OTT market.