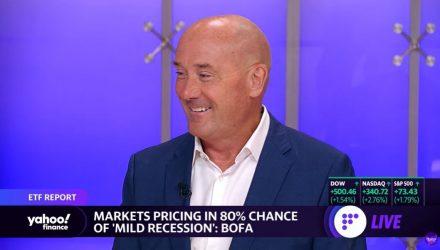 “Rates are going to continue to go up, and that’s something that we’re going to have to deal with,” @Vetta_Fi Vice Chairman @TomLydon says. “A year ago, it was unclear what the Fed was going to do.” pic.twitter.com/8YLjitrDSC

VettaFi Vice Chair Tom Lydon appeared on Yahoo!Finance to talk about the stock market’s big July, where it went up 9% and saw its best month since November of 2020. “Advisors are starting to go into those areas of the market that have been beat up really badly in the past month – areas like technology – the Nasdaq 100 is up 15% since the mid-June lows,” Lydon said.

Though inflation concerns have started to diminish somewhat and the war in Ukraine has become more normalized, investors still have concerns about inflation, rising rates, and geopolitical tensions. But Lydon sees advisors as less uncertain and more prepared for a rising rate environment than they have been. “The key thing there is they are not surprised because there has been good signaling that rates are going to continue to go up. A year ago it was unclear what the Fed was going to do.”

Though there are some indicators inflation is cooling, Lydon noted that “we may be in a period of 5-6% inflation for the next three to five years. Guess what? There are times when that’s actually been okay for the stock market.”

The earnings season has been better than anticipated, giving some advisors more confidence. “Specifically, when you look at earnings, the big surprise is back in the small-cap area.” Lydon noted, “Almost 75% of the small-cap stocks have outperformed on the top line and also on the bottom line.”

Small-caps, which are more nimble than their large and mega-cap counterparts, can be quicker to respond to broad market rallies.