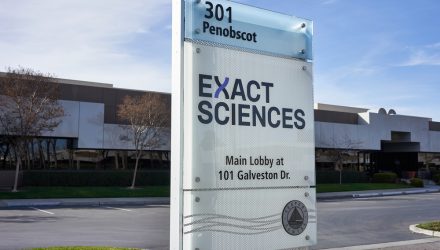 This Stock Is Now The Second-Largest Weight in ARKK

There’s a new top-three player in ARK’s flagship ETF, the ARK Innovation Fund (ARKK). Despite CEO Cathie Wood’s spree of contrarian plays for stocks like Tesla (TSLA) and Coinbase (COIN), it’s the Exact Sciences Corporation (EXAS) that is now the second-highest weighted stock in ARKK at 8.7%, just behind Zoom (ZM) at 9.2%, according to VettaFi. The new ARKK holding weights present an intriguing opportunity for investors given the state of the market and recent news at the molecular diagnostics firm.

EXAS spiked Thursday into Friday following news that its colorectal cancer test outperforms rival firm Guardant Health (GH)’s blood test for the same illness. EXAS is responsible for the first DNA stool test for colorectal cancer, Cologuard, which it launched in 2014. While GH’s test had an 83% sensitivity for detecting the cancer, Cologuard claims that its test has a 92% sensitivity rate.

That sent EXAS’ stock to a peak of $55.24 on Friday from $44.61 at the end of Thursday, though it has since dropped down to around $50.8. That price movement also took the strategy past its 200-Day Simple Moving Average of $47, though it has also just hit overbought territory according to the RSI Indicator.

EXAS topping TSLA shows that the flagship ARK ETF, often associated with TSLA, has more to offer than the electric car firm alone.

“While ARKK has become one of the most well-known ways to gain exposure to Tesla, there are many other positions inside that offer diversification benefits to shareholders,” said VettaFi head of research Todd Rosenbluth.

EXAS has received some interest in the second half of the year thanks to analyst excitement, with some positive price targets and a buy rating for Zacks last month. Investors looking at the stock may want to consider the merits of the new ARKK holding weights and its flows entering the new year. ARKK has added $1.43 billion over one year, charging 75 basis points. The ETF also provides a 1.74% annual dividend yield, according to VettaFi.

It’s been a difficult year for tech stocks, including biotech. The broad market selloff may just be a precursor for a rising rate-driven recession next year, but investors preparing for 2023 may still want tech exposure. ARKK could be a good option with the likes of EXAS and Cologuard on its side, and certainly always one to watch as one of the premier disruptive innovation offerings available in the ETF wrapper.