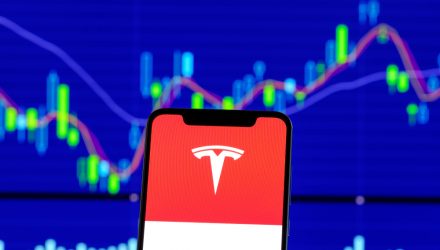 Tesla (TSLA) is the hottest stock on earth right now. The electric car disruptor has shot up 220% since September, leaving every other S&P 500 company in the dust. Take a look: 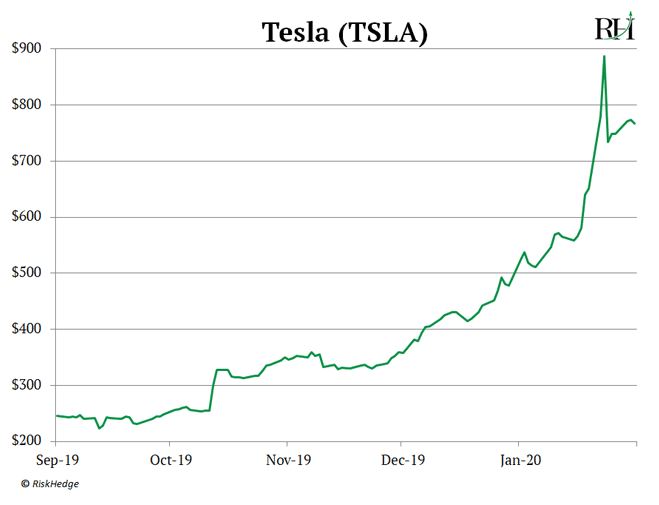 Over the past two weeks, dozens of folks have asked me: “Is now the time to buy Tesla’s stock?” Maybe you’re wondering the same thing.

As I’ll show you, the electric vehicle (EV) megatrend is ramping up, but Tesla isn’t the best way to play it. Yes, it just had a spectacular run-up, but its future is uncertain.

Meanwhile, there’s a safer, smarter, even more lucrative way to play the electric car boom for the long haul—one that will prove to be the real winner of this budding megatrend.

My long-time readers are already up 30% on this stock. And I’m sharing it with you today because I expect it to at least double from here.

I’ll explain why in a minute. But first, let me update you on where we are today.

The EV Revolution Is Getting Too Big to Ignore

Today, there are over seven million electric cars driving around the world. Roughly 750,000 are in America. 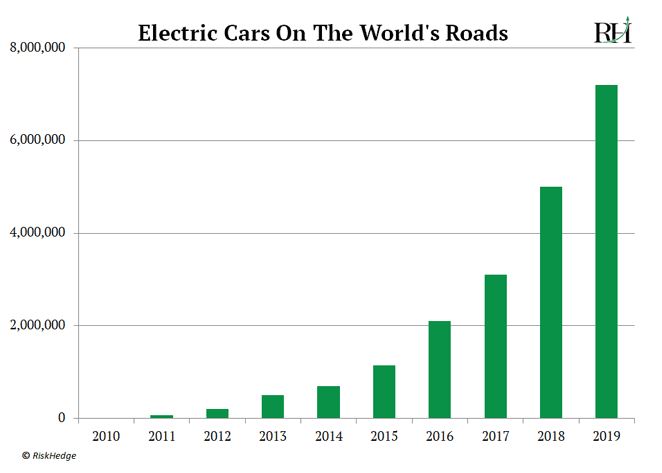 “After years of undeserved hype, electric cars are finally ready for prime time. EV’s sales have doubled over the past two years. Soon it will no longer make financial sense for most people to buy a gas-powered car.”

Now, it seems everyone is going “all in” on electric cars:

In all, roughly 100 new electric car models are expected to be released over the next two years!

Unlike regular cars, when you pop the hood on an electric car, you won’t find an engine. They run on batteries, like the one in your smartphone—but 10,000X more powerful.

In fact, the battery is by far the most critical part of an EV. It determines how far you can drive before you have to “refuel” at a charging station.

In 2011, most EVs couldn’t travel more than 70 miles before you had to plug them into a socket. And it used to take anywhere from 3–8 hours to fully charge. But now, thanks to one specific metal, batteries have drastically improved.

Now, high-end EVs like Tesla’s Model S go well over 250 miles before you have to plug them in. And Tesla’s new superchargers can fill the battery up to 85% in less than an hour!

What’s the Most Important Metal in These Super-Powerful Batteries?

As you can imagine, batteries powerful enough to run a car for over 250 miles must be able to store huge amounts of energy. But they also have to be relatively lightweight.

In battery tech, there’s always a trade-off between size and power. It would be great if your cell phone held enough power to last a whole month. But the battery would be the size of your fridge.

This trade-off made lithium—the world’s lightest metal—the perfect “fuel” for electric cars. In short, the metal crams more power into smaller, lighter devices. This is why lithium batteries already power your cell phone and laptop.

Lithium is probably best-known as a drug to treat bipolar disorder. Only tiny amounts of lithium are needed for these purposes. Even your phone battery contains only about a teaspoon of lithium.

But now, every electric car maker on the planet has to buy boatloads of lithium to stay relevant. Goldman Sachs research estimates there is roughly 150 lbs. of lithium in Tesla’s Model 3 battery. Roughly 10,000X more lithium than is in your phone battery!

The same report estimates for every 250,000 electric cars made, lithium demand jumps 70,000 tons/year.

I recommended the world’s largest lithium producer Albemarle (ALB) back in June. Albemarle controls 25% of the lithium market and owns the purest lithium mines on the planet.

Shares have been on a tear over the past few months, jumping to their highest level since 2018: 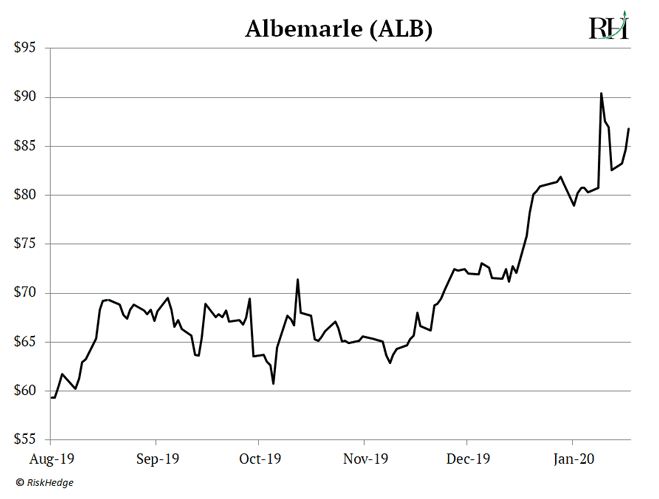 But it’s not too late to get in on this trade. I expect the stock to at least double from here.

Albemarle is the number-one way to profit as electric cars take over US roads. Right now, Tesla makes the best electric cars on the market. But as I mentioned, every major car company in the world is going electric.

Picking a winner in the auto industry is extremely hard. By owning Albemarle, we don’t have to back a horse in this race. We’ll make money whether Tesla, GM, Ford, or BMW comes out on top.