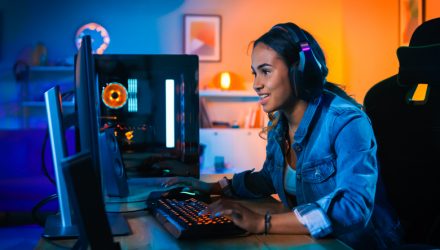 These Two Thematic ETFs Could Intersect in 2020

Among the many themes investors have heard plenty about in 2019 are 5G connectivity and video games. That’s likely to be the case in 2020 as 5G rolls out in earnest and with a video console upgrade cycle looming, among other factors.

Of course, there are ETFs to access both themes, including the  5G ETF (FIVG) and the  Global X Video Games & Esports ETF (NASDAQ: HERO).

5G technology will use a higher frequency band versus the current 4G technology standard, resulting in faster transmission of data. Being able to transmit copious amounts of data at a faster rate is certainly of benefit for wireless companies and their users, but 5G could be a major disruptor in various industries.

“Mobile gaming continues to transition into a more connected and service-based industry, and technological advancements offered by the next-generation 5G wireless standard are set to play a major role in this evolution,” according to S&P Global Market Intelligence. “New cloud gaming services, such as Google LLC’s Stadia and Microsoft Corp.’s xCloud, and subscription services, such as Apple Inc.’s Apple Arcade and Google Play Pass, have helped transform mobile phones into legitimate gaming platforms in 2019. These services have also increased the need for stronger and more stable internet connections.”

A New HERO Will Rise

HERO “seeks to invest in companies that develop or publish video games, facilitate the streaming and distribution of video gaming or esports content, own and operate within competitive esports leagues, or produce hardware used in video games and esports, including augmented and virtual reality,” according to Global X.

The Defiance Next Gen Connectivity ETF is the first ETF to emphasize securities whose products and services are predominantly tied to the development of 5G networking and communication technologies. FIVG does this by tracking the BlueStar 5G Communications Index, and FIVG attempts to invest all, or substantially all, of its assets in the component securities that make up the Index.

The possible applications of 5G technologies are only in the exploration stages, and the possibility of returns is uncertain and may not be realized soon. Nonetheless, it presents an opportunity that could see early adopters reap the benefits, especially if the technology is utilized to its fullest capabilities.

“When fully implemented, 5G is capable of delivering download speeds many times faster than today’s 4G LTE networks and significantly lower latency times, meaning the amount of time between data leaving a source and arriving at its destination,” notes S&P Global Intelligence. “The improved download speeds allow games and their updates to be delivered to the device faster, while the lower latency makes gameplay smoother and more accurate.”