You are at:Home»Disruptive Technology Channel»The ETF Ahead of Tesla’s Massive Cash Influx 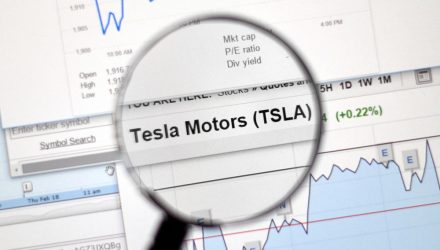 The ETF Ahead of Tesla’s Massive Cash Influx

As was widely reported last week, electric vehicle juggernaut Tesla (NASDAQ: TSLA) is headed to the S&P 500, which is going to unleash a spate of buying by index funds and active managers that benchmark to the popular U.S. equity gauge.

Tesla’s S&P 500 inclusion is important for exchange traded funds that were invested in the stock prior to the announcement, including the ARK Autonomous Technology & Robotics ETF (CBOE: ARKQ). The actively managed ARKQ has one of the largest Tesla allocations among all ETFs passive or active.

Underscoring ARK Investment Management’s prescience in being an early backer of Tesla stock and positioning it as ARKQ’s largest holding is the fact that the ETF is now positioned to benefits as active managers are now forced to allocate to Tesla.

“Tesla Inc. is poised for as much as $8 billion in flows from mutual funds when the electric car company is formally listed on the S&P 500 on Dec. 21, according to Goldman Sachs equity strategists,” reports S&P Global Market Intelligence. “Of 189 large-cap funds tracked by the investment bank, 157 with $500 billion assets under management did not hold Tesla stock at the start of the fourth quarter, Arjun Menon, Goldman’s vice president of U.S. equity strategy, and his team wrote in a Nov. 19 note.”

Currently, electric vehicles represent a small percentage of new automobiles sold around the world and cars on the road, but that percentage is expected to increase in a big way over the next several years. Massive growth is coming for the industry. Increasing battery life and power is converting more drivers to electric vehicles.

“Tesla’s stock was relatively flat in early trading Nov. 20 but has jumped more than 22.4% since its S&P 500 inclusion was announced Nov. 16,” notes S&P Global. “Tesla stock has skyrocketed nearly 433% on the year. On Nov. 18, Adam Jones, a Morgan Stanley analyst, upgraded Tesla to overweight following its S&P 500 inclusion, forecasting the stock price could increase by another 50%. Tesla was unexpectedly left out of the S&P 500 back in September when three new stocks were announced for inclusion on the large-cap index.”