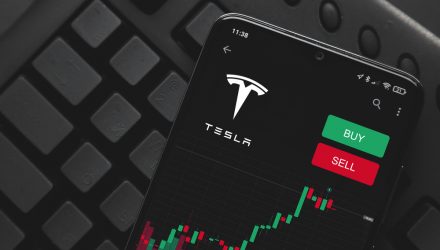 Few stocks elicit as much debate as Tesla (NASDAQ:TSLA) does, and that remains the case today despite years of jaw-dropping returns by the electric vehicle giant.

Even with a mostly impressive history in terms of returns, Tesla stock isn’t for everyone, underscoring the point that tapping exchange traded funds to access the shares is a prudent idea for many investors, particularly those with lower risk tolerance.

Enter the ARK Autonomous Technology & Robotics ETF (CBOE: ARKQ). The $2.46 billion ETF allocates 10.77% of its weight to shares of Elon Musk’s company, making it one of the more viable ETF proxies on the stock.

That’s relevant because both Tesla bulls and bears can and do eloquently state the cases. While the bears are being proven wrong to the extent that Tesla shares are rising, they say that the company faces increasing competition from legacy automobile manufacturers as well as upstart EV rivals. They add that government subsidies, which motivate drivers to embrace EVs, will eventually end and battery and solar panel prices will fall faster than Tesla can pare costs.

Conversely, Tesla bulls say that the company can disrupt both the automobile and power generation industries, adding that its profit margin growth is accelerating. Those supporters also claim that Tesla’s technology and network are the best in the EV space, providing the company with enviable market positioning.

“Tesla’s strategy is to maintain its market leader status as EVs grow from a niche auto market to reaching mass consumer adoption,” says Morningstar analyst Seth Goldstein. “To do so, the company is undergoing a massive capacity expansion to increase the number of vehicles it can produce. Tesla also invests around 5% of its sales in research and development, focusing on improving its market-leading technology and reducing its manufacturing costs.”

Of course, there are issues for ARKQ investors to monitor. The auto industry, EV and traditional, is cyclical and vulnerable to economic whims. Additionally, in order for EVs to wrest notable market share from internal combustion engine vehicles, manufacturers like Tesla not only have to recognize some form of price parity, they need to increase battery range and trim charging times to lure more customers. Tesla is committed to research and development, which is a benefit to investors.

“Tesla continues to expand its supercharging network, which consists of fast chargers built along highways and in cities throughout the United States, European Union, and China,” adds Goldstein. “The company is attempting to take a larger share of its customers’ auto-related spending, which includes selling insurance and offering paid services such as autonomous driving functions.”