You are at:Home»Disruptive Technology Channel»Tesla Looks Like a Winner in Battery Race 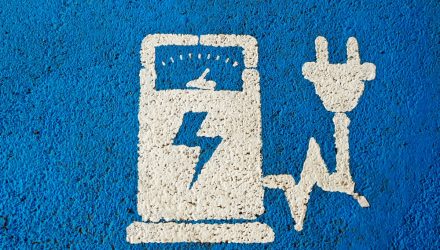 Many investors know Tesla (NASDAQ:TSLA) as the dominant maker of high-end electric vehicles, and with that status comes the ability to be a force in the battery and energy storage markets.

Tesla already checks those boxes, but it can extend leadership in those arenas, potentially benefiting exchange traded funds such as the ARK Innovation ETF (NYSEArca: ARKK) along the way. Battery storage is a vital part of the clean energy transition and one that Tesla already has significant leverage to. It’s been building battery storage systems for over 15 years.

“Battery storage is a key piece of the energy transition, and we believe a combination of improving economics, renewables growth and decarbonization policy initiatives across the globe are poised to drive a significant inflection in adoption in the coming decade,” says Goldman Sachs in a recent report.

The growth of the battery storage industry is undeniable and could be a marquee long-term catalyst for ARKK. The famed ARK Investment Management ETF allocates 10.22% to the electric vehicle giant, making the stock the fund’s largest holding. ARKK is also one of the largest ETF owners of Tesla shares, and that exposure could be a plus for investors going forward.

“Goldman believes the market will post a compound annual growth rate of 30% over the next decade, expanding to a total addressable market above $200 billion. This translates to a revenue opportunity of $33 billion by 2030, up from $5 billion in 2020,” reports Pippa Stevens for CNBC.

As the electric vehicle industry, including Tesla, continues achieving scale, and as lithium-ion prices decline, adoption of batteries could surge as most cost efficiencies are realized. Those are potentially significant catalysts for Tesla because its energy storage business is part of its vertically integrated recipe and could be a crucial driver of long-term returns.

“We forecast Tesla’s storage deployments…will grow at a 30%+ CAGR [compound annual growth rate] through 2023,” notes Goldman. “We believe Tesla’s storage business underscores the benefits of a tightly integrated hardware and software approach, which enables Tesla to achieve market-leading energy density and improve its products over time with OTA [over-the-air] updates.”

For companies and consumers, Tesla’s battery systems are potentially compelling because battery storage provides backup plans in the event of electrical grid disruption and can help avoid consuming electricity at peak demand times, reducing costs along the way.