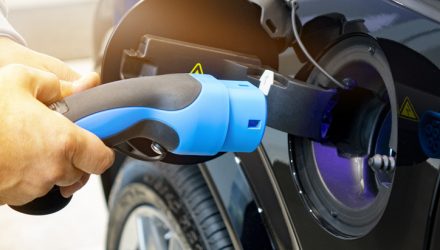 It’s just one day, but notable was the 1.5% gained by Tesla (NASDAQ: TSLA) last Friday on what was a brutal day for the broader market. If ARK Invest, the issuer of the ARK Innovation ETF (NYSEArca: ARKK), among other Tesla-heavy ETFs, is right, there’s a lot more upside coming for the electric vehicle maker and ARKK itself.

“Companies within ARKK include those that rely on or benefit from the development of new products or services, technological improvements and advancements in scientific research relating to the areas of DNA technologies (‘’Genomic Revolution’), industrial innovation in energy, automation, and manufacturing (‘Industrial Innovation’’), the increased use of shared technology, infrastructure and services (‘’Next Generation Internet’), and technologies that make financial services more efficient (‘Fintech Innovation’),” according to the issuer.

Shares of Tesla have more than doubled in just three months, but that isn’t preventing ARK from making an ambitious call on the stock.

“Based on our updated expectations for electric vehicle (EV) cost declines and demand, as well as our estimates for the potential profitability of robotaxis, our 2024 expected value per share for TSLA is $7,000,” said ARK analyst Tasha Keeney in a note out last Friday.

Investors should consider investable true innovation that causes rapid cost declines and demand growth, cuts across sectors and geographies, and spawns further innovation, stimulating growth over extended time horizons. When it comes to Tesla, ARK considered a variety of scenarios – from bankruptcy to extremely bullish – to arrive at the $7,000 call.

“Instead we estimate probabilities for each independent variable, resulting in 8 scenarios,” notes Keeney. “We’ve also included 2 scenarios that encompass worst case factors: 1) a 3% chance that Tesla is unable to access capital markets, lower costs, launch an autonomous taxi network, and become capital-efficient, and 2) a 1% chance of a black swan event in which Tesla goes bankrupt.”

“Our bear case implies that Tesla will sell 3.2 million vehicles in 2024,  cutting its share of total EV sales roughly in half compared to today’s levels,” according to Keeney. “Our bull case implies that Tesla will maintain its roughly 18% market share and that a substantial percentage of its fleet will generate high-margin robotaxi platform fees.”