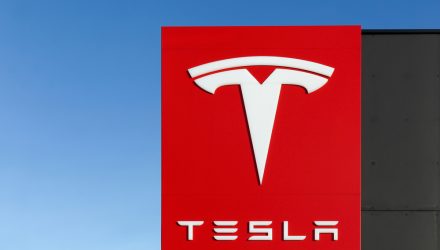 As companies, consumers, and investors know, brands have value, and that value is often material to investors. Along those lines, brand equity is something that Tesla has and that’s a plus for its shareholders and exchange traded funds with large allocations to the stock, including the ARK Innovation ETF (NYSEArca: ARKK).

The actively managed ARKK has a 10.87% weight to electric vehicle giant Tesla as of Oct. 28, according to ARK Invest data. That puts the stock 470 basis points ahead of ARKK’s second-largest holding. Often referred to as one of the “Tesla ETFs,” ARKK is positioned to capitalize on Tesla’s increasing brand equity.

Recently, “Interbrand released its Best Global Brands 2021 report, as summarized in the chart below. At $36 billion, Tesla is the 14th most valuable and fastest growing brand in the world. Last year alone, its brand value increased 184%, notable because we believe Tesla spends nothing on traditional brand advertising,” according to ARK research.

Not surprisingly, four other auto makers are on that list, three of which (Toyota, Mercedes, and BMW) rank ahead of Tesla. However, those companies are far older than Tesla, but Tesla is ahead of Honda in terms of brand equity.

For investors looking for traditional metrics, Tesla offers those as well. For just one example, the company recently inked a contract with car rental giant Hertz to deliver 100,000 electric vehicles.

“Tesla also reported third-quarter earnings including an automotive gross margin excluding regulatory credits of 28.8%, up more than 1000 basis points from 17.2% two years ago. At that time, ARK published a blog explaining that, based on Wright’s Law, Tesla should be able to boost that margin to 30%+ as it scales production in both Berlin and Austin, Texas. While the ride may not be smooth given the execution risks associated with new factories in new geographies, in our view Tesla’s margin expansion has further to go,” concludes ARK.

Other ARKK holdings on the Interbrands top 100 list for brand equity are Spotify (NYSE:SPOT) and Zoom (NASDAQ:ZM). Those are ARKK’s sixth- and seventh-largest holdings, respectively, and combine for about 8.5% of the fund’s weight.