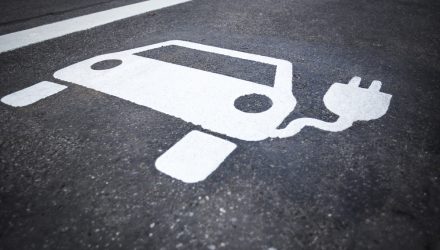 The ARK Innovation ETF (NYSEArca: ARKK) is known for being one of the more compelling plays on electric vehicle adoption, owing to its large exposure to Tesla. Now, ARKK could be capturing some political benefits too.

To be sure, ARKK is politically agnostic, but EV exposure coupled with the Biden Administration could be favorable for investors.

“Right now, the government gives a tax credit of $7,500 for a car. There’s a catch, though: Each manufacturer has a cap of 200,000 EVs sold in the U.S. If they sell more than that, a buyer can’t get the deduction. For example, Nissan hasn’t sold 200,000 of, say, its Leaf EVs, so a buyer gets the deduction. The same is true for other EV makers—the deduction is still available—except two: Tesla (ticker: TSLA) and General Motors (GM),” reports Al Root for Barron’s.

Rapid adoption of EVs should be propelled by improving battery technology, favorable economics for buyers, and an acceleration in investment in EVs by automakers. Innovations in battery technology by EV companies also have had positive implications for the rest of the alternative energy space.

One of the key components in evaluating growth strategies is execution, which ARKK offers investors. The fund has the benefit of active management, meaning it can target areas often overlooked by traditional passive rivals. Adding to the ARKK thesis is that many innovative companies may actually be undervalued, not overvalued.

“Early on, analysts figured Biden’s plan would lift the cap but keep the credit amount at $7,500. Now, they’re thinking no cap and a $10,000 credit, which would be what Wedbush analyst Dan Ives describes as ‘a goldilocks scenario in the eyes of the Street’ and a spark plug for the sector,” reports Barron’s.

Due to the increased concerns over environmental issues, global governments are supporting the development of electric vehicles worldwide.

One of the primary obstacles facing electric vehicle adoption is pricing relative to their internal combustion engine rivals. While EVs are still pricier than their traditional counterparts, the gap is closing.