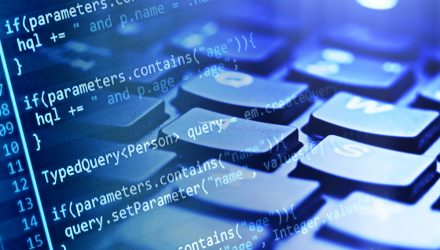 One of the reasons that many investors are drawn to the ARK Innovation ETF (NYSEArca: ARKK) is that it features exposure to multiple disruptive technologies.

Taking the broad view, ARKK’s themes of emphasis include automation, robotics, energy storage, artificial intelligence (AI), fintech, genomics, and next generation internet. The growth of those themes is supported by multiple industries, which are represented in ARKK. One of those is software — the backbone of a slew of innovative growth concepts and industries.

Software has long been a popular investment destination. Microsoft (NASDAQ:MSFT) is the largest U.S. company by market value, and the cloud computing boom and the migration to working from home, among other factors, set the stage for compelling long-term growth for the industry.

“We think the next several years will be exciting for software providers and their investors, as software spending is changing along several different vectors and will benefit from this evolution. Digital transformation was a favorable secular trend for the software industry, but COVID-19 has accelerated this trend in the near term and perhaps the medium term as well,” says Morningstar analyst Dan Romanoff.

Some ARKK components are benefiting from the remote work movement, which is in its early innings. Those names include Zoom (NASDAQ:ZM) and DocuSign (NASDAQ:DOCU).

“The explosion in remote-work enablers will evolve into the retention and expansion of those solutions to customers who have implemented them. For example, we have already seen good follow-through on customers acquired by Zoom and DocuSign during the depths of the coronavirus-driven lockdowns,” adds Romanoff.

Zoom, ARKK’s sixth-largest holding, and DocuSign combine for over 6% of the actively managed ARKK’s weight. Another vital foundational piece for ARKK investors is the fund’s cloud computing exposure. Cloud computing is one of the fastest-growing technology segments, and its long-term potential is attractive because it intersects with other disruptive technologies, including but not limited to healthcare innovation and streaming entertainment. Several ARKK components are cloud names.

“The use of a public cloud allows a company to reduce or redeploy IT head count while generally moving the infrastructure to more-advanced technology building blocks,” notes Romanoff. “This decision then lowers IT costs directly through lower up-front capital expenditures on hardware and lower ongoing maintenance requirements, which then allow for lower IT head count or personnel redeployments. It also results in improved IT performance on many facets, the most important being increased flexibility, faster performance and throughput, and better security.”