You are at:Home»Disruptive Technology Channel»Stick With This Top Performing ARK ETF 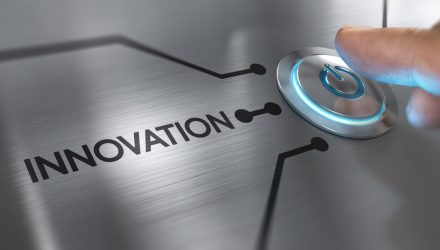 The CFRA Focus ETF for January is ARK Innovation ETF (ARKK). Unlike most equity ETFs that track an index, ARKK is actively managed by Cathie Wood, the firm’s Chief Investment Officer.

Companies within ARKK include those that rely on or benefit from the development of new products or services, technological improvements, and advancements in scientific research relating to the areas of DNA technologies; industrial innovation in energy, automation, and manufacturing; the increased use of shared technology, infrastructure, and services; and technologies that make financial services more efficient. While ARK Funds offers ETFs dedicated to these individual investment themes, ARKK typically holds between 35 and 55 holdings and tends to concentrate its assets in top-10 assets. In rating ETFs, CFRA combines holdings-level analysis with fund attributes.

As of late December 2020, the top-10 holdings represented 52% of assets. The largest, at 10% of assets, was Tesla (TSLA), which according to Wood is three to four years ahead of the competition in the electric vehicle space and is positioning itself to bring cars to market below the $25,000 sticker price in the next three years.

According to CFRA Equity Analyst Garrett Nelson, TSLA just posted another solid quarter of operational execution and impressively almost hit an ambitious annual sales target despite the pandemic-related challenges. Following the stock’s spectacular 2020 performance, up more than 700%, capped off by an inclusion in the S&P 500 Index, Nelson views TSLA’s risk/reward as more balanced at current levels, justifying a Hold recommendation.

Another top position in ARKK is Square (SQ), which fits into the next generation internet theme. Wood recently noted that SQ pivoted its offline sellers to online commerce, enabling a sharp increase in gross payment volume. In the third quarter, the company’s net revenue increased 25% and CFRA Equity Analyst John Freeman thinks the company’s bitcoin capabilities could drive further user engagement. Freeman’s Hold recommendation incorporates his concerns that the margin expansion will materialize as fast as investors are anticipating as the company plans to increase marketing efforts.

CFRA’s Freeman is more bullish on another of ARKK’s top positions, Spotify Technology (SPOT). In November, he upgraded his recommendation to Buy from Hold, seeing attractive valuation relative to SPOT’s long duration growth prospects and its emerging position as the leading independent global provider of audio entertainment and content, differentiated by its massive library of 1.9 million podcasts at the end of the third quarter, up 20% from the second quarter. Freeman also sees strength for SPOT in emerging markets.

Meanwhile, Slack Technologies (WORK) was a top-10 holding in late December but has since been sold. The software company agreed in December to be acquired by salesforce.com (CRM) following a premium takeout price to its recent trading level. We think ARKK booked a strong gain from its position.

CFRA does not have a qualitative recommendation on Proto Labs (PRLB), an industrial machinery company, or Teledoc Health (TDOC), a health care technology company, both part of the ETF’s top-10 holdings. Yet, these companies, along with TSLA, Baidu (BIDU), and Tencent Holdings, are examples of holdings with favorably strong earnings quality, according to our forensic accounting research.

In addition to using holdings-level analysis to assess an ETF, CFRA incorporates past performance metrics. While we do not always reward ETFs with strong records a top overall rating as we focus on avoiding tail risk, ARKK’s five-star rating is aided by its consistent performance in the short and intermediate term, which contributes to its favorable safe risk score. ARKK more than doubled in value in 2020, but it is not a just recent strong performer. The ETF rose 87% in 2017 and 35% in 2019.

ARKK has ballooned in size to $18 billion at the end of 2020, driven in part by $9.6 billion of net ETF inflows according to CFRA’s First Bridge ETF database, with $3.1 billion occurring in December alone. While some of this hot money might not remain patient if the ETF inevitably fails to double in value in 2021, we think ARKK is positioned to outperform its global equity ETF peers in 2021.