You are at:Home»Disruptive Technology Channel»Stars Are Aligning for This Video Game ETF 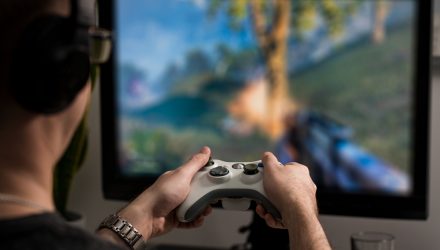 Stars Are Aligning for This Video Game ETF

Video game stocks and ETFs are benefiting in significant fashion from stay-at-home orders and the Roundhill BITKRAFT Esports & Digital Entertainment ETF (NYSEArca: NERD) is among that group. NERD is up 38% in the current quarter and is recently spotted making a series of all-time highs.

Data confirm that shelter-in-place directives spurred gamers to get the game on.

“According to our survey results, a third of Americans have increased their time playing video games since quarantining,” notes Satellite Internet. “But with more people online, you may need faster internet to keep up with the competition: 39% of online gamers have experienced increased buffering during the quarantine.”

The NERD Is Cool

Other data points confirm that gamers display similar habits to consumers of other forms of entertainment, a trend that’s been on display during the coronavirus and one that cements the long-term thesis for NERD.

As ETF Trends reported last week, Will Hershey, chief executive of Roundhill Investments, also noted that the video gaming business was already doing well before the coronavirus outbreak, and it received a significant boost from “live, traditional sports being put on hold” as more look consider E-sports as another form of entertainment with stadiums locked down.

“One catalyst investors can look to later this year is the hardware upgrade cycle, meaning the debuts of the PlayStation 5 and the new Xbox in advance of the holiday shopping season,” according to Nasdaq.