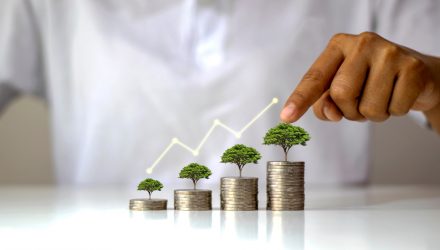 Some Growth Stocks Are Showing Signs of Life

Don’t call it a full comeback quite yet, but some growth stocks, including some in the disruptive camp, are starting to perk up.

Of course, the longer that scenario lasts, the better it is for exchange traded funds such as the ARK Innovation ETF (NYSEArca: ARKK). ARKK still has work to do, as it’s down 29.8% year-to-date. However, the vaunted ETF is also higher by 5.51% over the past week and up 9% over the past month.

“Growth stocks like Apple and Tesla have had quite the time these past four months–retreating, then roaring. Now, they look like they are finding their footing as the economy looks like it could slow down,” reports Jacob Sonenshine for Barron’s. “It’s a cycle that seasoned investors know well: a rebound for growth stocks after an economic growth spurt that the Federal Reserve decides to clamp down on.”

Tesla (NASDAQ:TSLA) is highly relevant in the ARKK conversation because Elon Musk’s electric vehicle juggernaut is the fund’s largest position at a weight of 10.72%, or more than 400 basis points in excess of ARKK’s second-largest component.

As has been widely noted, the primary drag on growth equities in recent months has been fears of Federal Reserve tightening. That scenario arrived last week when the central bank boosted borrowing costs by 25 basis points and set the stage for perhaps as many as six more increases over the course of 2022. However, at least there’s some monetary policy clarity for investors to now assess.

“For growth stocks, the main culprit was surging long-dated bond yields–pushed up by expectations about what the Federal Reserve was going to do about 40-year-high inflation fueled by an overheated economy,” according to Barron’s.

In addition to Tesla, some other previously battered ARKK holdings are perking up. Over the past month, Roku (NASDAQ:ROKU) is up 7.59%, while Coinbase is higher by 10.1% and Teladoc (NYSE:TDOC) is up almost 13%. That trio combines for about 18.8% of ARKK’s portfolio.

At the end of the day, rate history seems to be repeating itself, indicating that the darkest clouds for ARKK may have passed.

“Usually, before the Fed tightens monetary policy, growth stocks lag behind their value counterparts. That’s often because strong demand drives up consumer prices—and value stocks see strong earnings growth when the economy picks up steam,” notes Barron’s. “Then, the Fed tries to tame inflation by lifting short-term interest rates, which causes a slowdown, sometimes even a recession. Any letup is an incentive for investors to ditch value stocks for growth ones.”