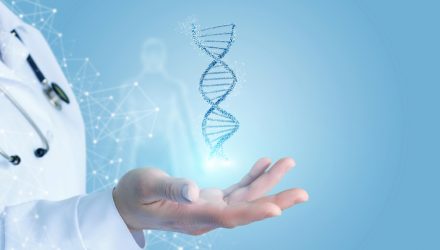 Some ARKG Components Could Lead in Genetic Testing

In the healthcare space, it’s often said that an ounce of prevention is worth a pound of cure, and that’s undeniably true when it comes to cancer prevention and treatment.

“Despite mounting evidence from Myriad Genetics (MYGN), Invitae (NVTA), and other genetic testing leaders suggesting that patients with many cancer types could benefit, hereditary testing today is focused primarily on breast and ovarian cancers,” according to ARK Investment Management research.

For now, Invitae is a small part of the ARKG roster, while Myriad Genetics isn’t part of the lineup. However, it’s worth remembering that ARKG, unlike many of its genomic ETF brethren, is actively managed. That means the ARK ETF can be more responsive to emerging genetics trends, including cancer screening, than index-based rivals.

Indeed, data confirm the validity of expanding the field of cancers that be identified early by way of hereditary screening. The earlier cancer is found, the better patient outcomes are.

“As examples, 17%, or 1 in 6 patients, with prostate, colorectal, pancreatic, or dermatological cancers have hereditary cancer mutations that are clinically actionable,” added ARK. “Invitae has shown that pancreatic cancer (PDAC) patients with certain hereditary variants respond better than others to chemotherapy, suggesting that testing would have prognostic utility. A Myriad study showed that, for certain mutations, an increase in a measurement of risk, the odds ratio (OR), could help oncologists tailor cancer surveillance strategies.”

One thing for investors to remember is that boosting genetic testing is very much a long-term ballgame, which is to say, don’t expect it to lift ARKG’s fortunes overnight because more education is needed, among other factors.

“While universal hereditary genetic testing could provide prognostic, diagnostic, and therapeutic information to cancer patients, the barriers to adoption today still are significant: a shortage of genetic counselors, a lack of education for physicians and patients, and restrictive medical guidelines. With lower costs and increasing evidence of clinical utility, we believe that current policies will change, ultimately increasing the demand for hereditary testing,” concluded ARK.