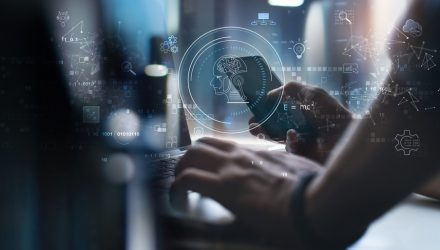 Research from ARK Invest estimates that as companies generate productivity gains from artificial intelligence, software spending per year could grow at a 42% compound annual rate from just under $1 trillion today to $14 trillion in 2030.

According to the firm’s estimates for 2030, propelled by AI software, total IT spending could increase 20% at an annual rate and surpass $20 trillion, which is four times the ~$5 trillion consensus estimate, according to research from the firm.

“According to our research, during the next eight years AI software could boost the productivity of the average knowledge worker by nearly 140%, adding approximately $50,000 in value per worker, or $56 trillion globally, as shown below,” Will Summerlin, ARK Invest analyst, wrote in a recent insight. “We expect the value of a knowledge worker empowered with AI to increase ~15% at an annual rate, compared to the 2.7% consensus expectation for annualized wage growth through 2030.”

Anticipating more than a doubling in productivity, companies are likely to purchase AI software at a 75% discount to boost worker productivity, Summerlin wrote. “In other words, for every $1 gain in productivity, they probably will be willing to dedicate $0.25 to software licensing.”

ARK Invest, however, does not believe AI will lower the overall demand for human labor. Instead, productivity and GDP gains should enhance the health of labor markets over time.

ARKK is an actively managed ETF that invests at least 65% of its assets in companies relevant to the investment theme of disruptive innovation. ARK defines ‘‘disruptive innovation’’ as introducing a technologically enabled new product or service that potentially changes the way the world works.

This includes companies that rely on or benefit from the development of new products or services, technological improvements, and advancements in scientific research relating to the areas of DNA technologies and the “genomic revolution,” automation, robotics, energy storage, artificial intelligence, the “next-generation internet,” and fintech innovation.