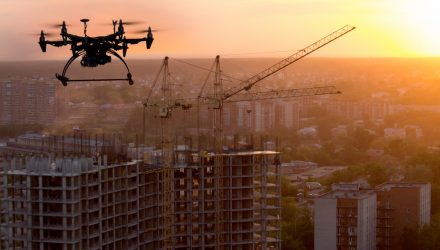 Social Distancing Has Drone Deliveries In Style, Could be Huge for This ETF

With the coronavirus forcing social distancing upon Americans, e-commerce and home deliveries are taking off. Thing is neither delivery personnel nor package recipients want to interact with each other for fear of contracting the respiratory illness.

That’s sparking an uptick in drone deliveries, a potentially efficacious theme for the ARK Web x.0 ETF (NYSEArca: ARKW). When it comes to disruptive technologies, including drones, ARKW is one of the pioneering ETFs.

The drone evolution could have a substantial, material impact on some ARKW components, including Amazon.com (NASDAQ: AMZN). That stock accounts for 3.44% of the ETF’s weight.

“ARK previously estimated that, given regulatory approval in the US, an Amazon drone could deliver a package in less than half an hour profitably today for $0.90, cutting the cost of domestic shipping by roughly 90%,” said ARK analyst Tasha Keeney in a recent note.

“Adjusting for our updated assumptions, particularly the efficiency of autonomous flight and the amount of human intervention, ARK now estimates that parcel drones could deliver packages profitably for only $0.25,” said Keeney. “Given frictionless and inexpensive delivery, consumers probably would buy many more goods online, growing eCommerce’s share of retail sales from 14% in 2019 to 60% in 2030, with drones delivering more than half of the eCommerce volumes.”

Other data points bode well for ARKW from a long-term perspective, including increased drone delivery penetration in the low-cost market.