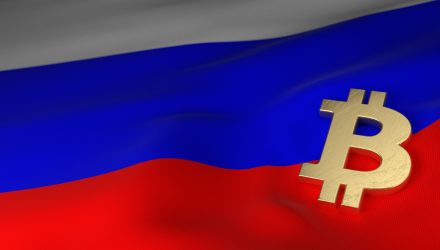 Bitcoin prices are off 12% over the past week, and while that’s a source of frustration for crypto investors, Russia’s ongoing invasion of Ukraine underscores the potency of cryptocurrency as a pillar of economic independence.

For example, bitcoin and other digital assets are proving to be vital fundraising avenues for organizations supporting the Ukraine resistance at a time when the country’s traditional financial system is on shaky ground because of Russia’s hostility.

Additionally, many Russians are turning to bitcoin amid a run on the banks in that country and as sanctions by the West all but exclude that country from standard global financial systems.

Some critics are alleging that Russians are turning to bitcoin to skirt the aforementioned sanctions, and while that may be true of ordinary citizens who are looking to guard against the collapsing ruble, chances are that the extremely wealthy Russian oligarchs aren’t yet embracing bitcoin. If they were, the Bitcoin blockchain network would expose massive purchases, as ARK points out.

“Meanwhile, controversy at blockchain infrastructure provider Infura and NFT marketplace OpenSea during the last few weeks have highlighted that dependence on any central service provider could undermine the benefits of crypto networks,” notes the exchange traded fund issuer. “To comply with sanctions, Infura and OpenSea had to ban IP addresses originating from Russian controlled regions of Ukraine, including Donetsk and Crimea, and delist individual accounts.”

As the crypto landscape expands and evolves, another point for investors to consider is the role of networks prioritizing a single point of failure over decentralization. After all, decentralization is part of the allure of this asset class. Some fintech companies are working to enhance privacy and decentralization.

“As a result, companies like Block that are focused on developing privacy and decentralization for the custody and exchange of bitcoin are likely to gain share and thrive,” concludes ARK.

Block (NYSE:SQ), the company formerly known as Square, accounts for 11.72% of the ARK Fintech Innovation ETF (NYSEARCA: ARKF), making the stock the largest component in that actively managed ETF.