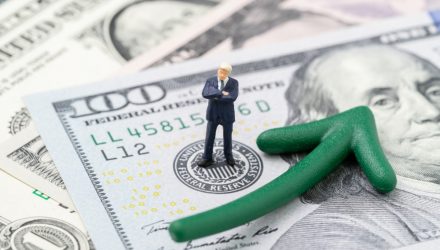 With 10-year Treasury yields trending higher in recent weeks, investors are pondering what that means for various sectors and factors exposures.

On that note, market participants were taught a rough lesson earlier this year when 10-year Treasury yields spiked. That weighed on tech and growth stocks and the related exchange traded funds, including the ARK Innovation ETF (NYSEArca: ARKK).

Conventional wisdom holds that rising interest rates weigh on growth and technology stocks due to the longer duration cash flow component found with these assets. That scenario played out earlier this year as 10-year yields soared, weighing on ARKK in the process. However, the historical relationship between the tech sector and rising 10-year yields is more favorable than many investors are conditioned to believe.

“It turns out that when the numbers are crunched, over the past 15 years there has only been a small inverse correlation between technology stocks and bond yields. In other words, when bond rates rise, there is a slight tendency for tech stocks to fall,” according to Morningstar. “That was true also during the last time the Federal Reserve was raising interest rates, from late 2015 through the end of 2018.”

No Need to Abandon ARKK

Obviously, there’s no denying that ARKK and other disruptive growth assets faltered earlier this year against the backdrop of rising Treasury yields. However, some of that weakness may be attributable to profit-taking in the fund following a stellar performance in 2020. In other words, a pullback was likely in order, healthy for the long-term trajectory of growth stocks and not necessarily entirely the result of rising 10-year yields.

Investors considering a position in ARKK today might want to have a look at tech’s long-term correlations to 10-year yields, which indicate that the group isn’t as rate-sensitive as previously believed.

“With a correlation of negative 0.33 between tech stocks and 10-year Treasury yields over the past 15 years, the inverse relationship is relatively low. When it comes to Treasury bill yields, there’s almost no relationship,” adds Morningstar.

It remains to be seen for how long the current run higher by 10-year yields lasts and if it will have a profoundly negative impact on assets like ARKK. However, buoyed by secular tailwinds from groups such as cloud computing, genomics, fintech, and more, ARKK has the right ingredients for solid long-term returns regardless of how monetary policy shapes up.