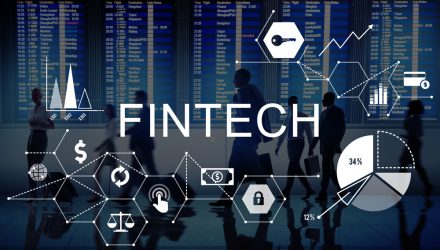 The ARK Fintech Innovation ETF (NYSEARCA: ARKF) is a prime example of an ETF with a slew of tailwinds and many of those are derived from two marquee holdings: Square (NYSE:SQ) and PayPal (NASDAQ:PYPL)

In fact, the actively managed ARKF allocates 11.63% to Square, the largest weight that fintech name among all exchange traded funds. PayPal is further down the ARKF roster.

“PayPal’s (ticker: PYPL) business has been turbocharged by consumers that shifted from cash to digital payments during the pandemic,” reports Daren Fonda for Barron’s. “The company added record new accounts this year, and it has seen payments volume surge. The sustainability of that growth is an overhang on the stock, but Deutsche Bank’s Bryan Keane says it could actually be accelerating, fueling revenue and earnings growth that likely will beat consensus estimates.”

Payments are increasingly going digital with a number of start-ups seeing venture capital seed money to help facilitate online purchases. According to the research company Pitchbook, data shows that investors put $18.5 billion into the payment processing sector in 2018–an increase of five times the previous year.

“PayPal is also rolling out installment-payments for account owners, a market that could be a hit, since PayPal is offering the plans without fees or interest rates—attracting both merchants and consumers. He adds that PayPal should benefit from higher usage of its Venmo peer-to-peer app, along with the rollout of PayPal credit cards and debit cards for Venmo,” according to Barron’s.

Square has its own batch of catalysts. Making ARKF’s Square exposure all the more compelling is that Cash App and digital wallets, in general, are not being appropriately factored into fintech share prices. Nor is brand value as it pertains to Square.

Oppenheimer’s Jed Kelly “expects the company to capture more payments volume through its increasingly popular Cash App, which is being adopted by more consumers and merchants who are eager to digitize sales. He sees Cash App gross profits rising from $1 billion in 2020 to nearly $2.5 billion in 2022, a 54% compound annual growth rate,” reports Barron’s.