You are at:Home»Disruptive Technology Channel»Opportunity Could Be Knocking for Disruptive Healthcare Strategies 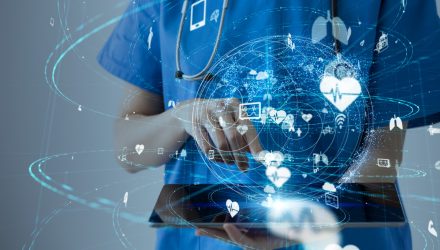 Opportunity Could Be Knocking for Disruptive Healthcare Strategies

Disruptive, next-generation healthcare strategies, including the ARK Genomic Revolution Multi-Sector Fund (CBOE: ARKG), are scuffling this year, but those struggles belie opportunity — something the healthcare sector is ripe with.

The good news for investors considering ARKG is that the healthcare sector still offers a lot to like and could be a source of credible long-term upside.

“The sector has many favorable long-term attributes, such as new cost-saving and care-improving advances in medical technologies, an aging global population, and a growing middle class in emerging-market economies—all of whom will demand more extensive drug treatments and medical care over time,” says David Kastner of Charles Schwab.

The actively managed ARKG focuses on companies engaged in agricultural biology, bioinfomatics, CRISPR, molecular diagnostics, and targeted therapeutics, among other innovative corners of the healthcare sector. Due to the fact that many of the concepts represented in ARKG are new by the standards of the healthcare space, healthcare disruptors rarely trade at discounted multiples, but there’s some evidence that some ARKG member firms may be discounted relative to their histories of lofty valuations.

Broadly speaking, shareholder rewards don’t apply to ARKG components. In this case, that’s alright because investors should prioritize genomics companies that are investing in research and development, not those saddled by dividend obligations.

However, some of ARKG’s 53 components are attractively valued, while others are credible takeover targets. The latter point is one to watch in 2022 because large-cap pharmaceuticals companies are flush with cash and need to bolster product pipelines and fight off patent cliffs. With prices depressed on some ARKG components, it’s possible that the ETF’s roster could be fertile ground for mergers and acquisitions activity in 2022.

Over 63% of ARKG’s components, as of the end of the third quarter, are mid- and small-cap stocks, underscoring the point that the fund could be an epicenter of takeover activity and speculation next year.