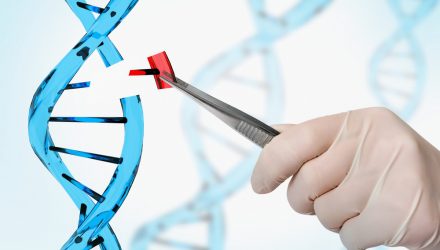 The rapid cost declines associated with gene editing and gene synthesis are turbo-charging scientific creativity, enabling the testing of hypotheses that, until now, have been cost-prohibitive, ARK Invest wrote in a recent newsletter.

The impact has the potential to be profound should this early research enter later stage clinical trials. Like Blincyto, many drugs require continuous infusions, keeping patients attached to IVs in the hospital or at home. Nationwide’s research suggests that a single dose of gene therapy could induce the continuous production of medicine inside the body for up to 36 weeks, according to Barnett.

Although this technique could face some of the delivery and targeting drawbacks associated with other gene therapies, Nationwide’s breakthrough research could impact the administration of simpler, protein-based drugs like Keytruda or Opdivo, Barnett wrote.

Companies within the actively managed equity strategy are focused on and are expected to substantially benefit from extending and enhancing the quality of human and other life by incorporating technological and scientific developments and advancements in genomics into their businesses, according to ARK’s website.