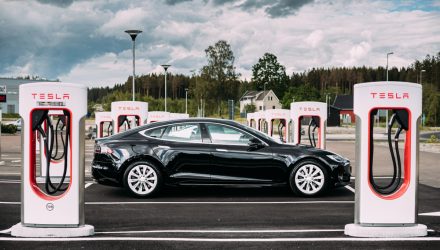 Talk of Tesla and its battery development efforts could stoke more interest in the already high-flying ARK Autonomous Technology & Robotics ETF (NYSEARCA: ARKQ), an actively managed ETF with one of the largest Tesla exposures among all ETFs.

Talk that Tesla is close to bringing to market an electric vehicle battery that could last up to 1 million miles could be a catalyst for the stock and ARKQ.

“In our opinion, this battery technology will be very advanced, potentially last for decades, withstand all types of weather/terrain, and be another major milestone for the Tesla ecosystem,” Wedbush analysts said. “In theory, this battery will support an electric vehicle for 1 million miles and be a major step forward when competing vs. traditional gasoline-powered automotive competitors from both [a return-on-investment]and environmental perspective.”

“The battery is the most expensive part of an electric vehicle, though battery costs have plummeted over the past decade,” according to Business Insider. “In 2019, Cairn Energy Research Advisors estimated that electric-vehicle battery packs made with cylindrical cells, the kind Tesla uses, cost less than packs with the kinds of cells used by Porsche, Chevrolet, and BMW. Cairn predicted battery-cell costs would continue to decline over the next decade.”

Global automotive industry observers believe electric vehicles will reach comparable price points to traditional internal combustion engine vehicles sometime in the next several years, making it more compelling for drivers to make the switch to electric vehicles. EV adoptions are likely to accelerate as a result of EVs becoming more economical than gas-powered cars and as a result of pro-climate regulatory changes pushing to ban gas-powered cars.

“Another linchpin to Tesla’s battery innovations and the Street’s focus of the upcoming Battery Day will be reducing battery production costs to the key $100/kWh threshold, as this would give Tesla much more financial flexibility around pricing on current and future EV models with price parity,” notes Wedbush.