You are at:Home»Disruptive Technology Channel»More Good News for Tesla Could Benefit This Popular ARK ETF 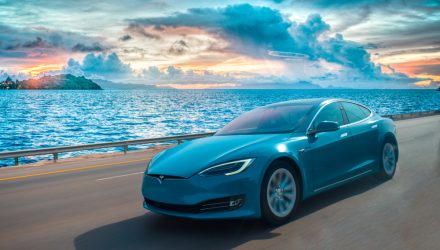 The ARK Industrial Innovation ETF (NYSEArca: ARKQ) is one of the more versatile exchange traded funds in the disruptive/innovative landscape and it’s often known for its large weight to Tesla. Of course, that trait is favorable and it appears as though that will remain the case this year.

The actively managed ARKQ invests in companies that potentially stand to benefit from increased adoption and utilization of robotics and artificial intelligence (AI), including those involved with industrial robotics and automation, non-industrial robots, and autonomous vehicles. Space exploration is also one of the themes the ETF taps into and data confirm that exposure is increasingly relevant.

“Morgan Stanley is the new biggest Tesla bull after analyst Adam Jonas raised his target on the stock to a Wall Street high of $810, up from his prior forecast of $540. The boost follows the electric vehicle maker’s record fourth-quarter delivery numbers,” reports Pippa Stevens for CNBC.

Tesla helped ARKQ more than double in 2020 and while banking on a similar performance this year is tricky, the ARK ETF is starting the year on a positive note thanks to the Jonas call on Tesla.

“Despite the extraordinary run in the share price, we continue to believe that Tesla can outperform vs. our sector in 2021,” Jonas wrote in a note while reiterating his overweight rating on the stock. “In our opinion, Tesla is still the best-positioned company in EVs and AVs under our coverage due to its people, its technology, business model, and access to capital.”

Another reason ARKQ’s Tesla allocation is meaningful is that Elon Musk’s company consistently proves adaptable and is winning the EV battle in terms of $/charging rate, or miles of range added per minute of charging.

ARKQ enables investors to access high growth potential through companies critical to the development of autonomous and electric vehicles – a potentially transformative economic innovation. It also boasts a broad reach into the EV ecosystem.

“We have been looking increasingly closer at a range of start-up players in the EV space and have increased conviction that Tesla’s technological position and business model is the right one for this once-in-a-generation transition to sustainable transport,” notes Jonas.