You are at:Home»Disruptive Technology Channel»Low Carbon, High Returns With This ETF 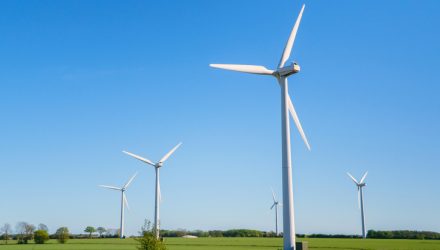 Investors looking for a hot corner of the market, at least to this point in 2020, ought to consider alternative energy ETFs. Just look at the VanEck Vectors Low Carbon Energy ETF (NYSEArca: SMOG), which is higher by 16.27% as of Feb. 20.

The $122.1 million SMOG follows the Ardour Global Index Extra Liquid, which “is intended to track the overall performance of low carbon energy companies which are those companies primarily engaged in alternative energy which includes power derived principally from biofuels (such as ethanol), wind, solar, hydro and geothermal sources and also includes the various technologies that support the production, use and storage of these sources,” according to VanEck.

SMOG is often highlighted due to its large weight to high-flying Tesla (NASDAQ: TSLA), nearly 18% as of Feb. 19, but there’s more to this ETF’s story.

“Starting on January 1, 2020, the California Energy Commission mandated that all new residential construction under three stories high will have a solar energy component, while also incentivizing battery storage to meet a target of reducing energy use in new homes by half,” said VanEck in a recent note. “The impact of this is significant and far-reaching: currently, only one out of five new homes in California has solar. It is estimated that this mandate could result in 40%+ growth in residential solar demand in California in 2020, with further improvement as this impact continues into the out-years.”

The idea behind SMOG makes it more than just a traditional fossil-fuel-based real assets type strategy. Not only does it include infrastructure and real estate, which are outside of commodity-based products, it now has an allocation to alternative energy, which is quite common in the space.

Adding to the case for SMOG is the other element of California’s solar panel drive.

“California’s solar mandate, while grabbing headlines on the panel side, is inherently focused on overall energy efficiency,” according to VanEck. “That introduces the incentive for battery storage. Under the mandate, homebuilders can deploy storage to offset the size of the solar PV system by up to 25%. Sunrun, one of the largest U.S. residential solar developers, revealed on its last earnings call that attachment rates for storage systems were 15% across the country, 30% in California and 60% in the Bay Area.”