You are at:Home»Disruptive Technology Channel»The Latest in Fintech ETFs? Melding Supply and Demand 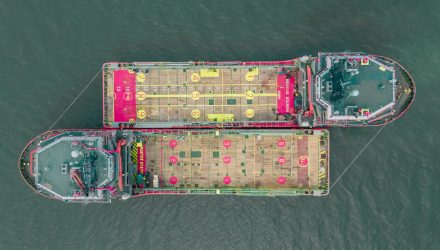 The Latest in Fintech ETFs? Melding Supply and Demand

Digital wallets are taking the fintech world by storm. Among exchange traded funds, the ARK Fintech Innovation ETF (NYSEARCA: ARKF) is perhaps best-positioned to capitalize on the trend.

Many investors are already familiar with digital wallets thanks to Cash App and Venmo, which come courtesy of Square (NYSE: SQ) and PayPal (NASDAQ: PYPL). Customers and investors are familiar with Cash App and Venmo as ways of transferring money, but the reality is that the digital wallet story is rapidly expanding. That expansion carries considerable investment implications.

“Last week, several companies announced plans involving the convergence of e-commerce and payments. Uniting them were two-sided networks aggregating demand and supply, or consumers and merchants,” according to ARK research.

Two-sided networks will bolster the intersection of fintech and online retail, among other compelling uses for consumers and investors alike.

Two-Sided Networks Are Huge for ARKF

Fintech is a growth proposition, not a value play. But some data points suggest markets are undervaluing digital wallets, and that could spell opportunity for ARKF investors.

“For the first time, Shopify announced the expansion of Shop Pay to Shopify merchants on a new platform, Facebook. While it framed the launch as value-add for merchants and denied its ambitions to become a marketplace, in the words of CEO Tobi Luetke a ‘distorting middle channel’, Shopify likely will use Shop Pay as a customer acquisition tool for its consumer-facing Shop app, ultimately feeding its merchant sales funnel,” notes ARK. “During its investor day, PayPal presented its vision of a digital wallet with ‘hundreds and hundreds of million consumers building demand curves… that retailers will be able to address’. During its earnings call, Affirm hinted at building out its consumer brand by expanding ‘into higher frequency purchases’, establishing closer relationships with consumers and generating demand for its merchants.”

“Venture capitalist Bill Gurley has analyzed two-sided networks, or marketplaces, through an interesting lens. Gurley argues that aggregating demand organically is more difficult than aggregating supply and will differentiate marketplaces from one another,” concludes ARK. “Given his lens and logic, digital wallets like Cash App and Venmo could face much less friction than others in forming two-sided networks, as they already have aggregated tens of millions of monthly active users and have leveraged their scale to integrate with merchants.”