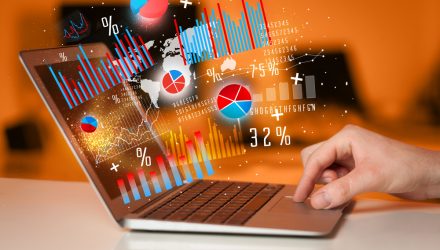 It’s Not Just U.S. Tech Stocks That Are Hot

U.S. technology stocks are garnering plenty of headlines lately and rightfully so. With the Nasdaq Composite reentering positive territory on a year-to-date basis while the S&P 500 continues laboring in the red, investors’ enthusiasm for domestic tech is understandable.

However, China has its own vibrant technology sector. Just look at the Global X MSCI China Information Technology ETF (CHIK), which jumped more than 12% last week.

Understanding CHIK’s rally is easy and familiar for U.S. investors.

“China tech is benefiting from the same accelerated rush online that has vaulted shares in U.S. counterparts like Amazon.com (AMZN) and Netflix (NFLX),” reports Craig Mellow for Barron’s. “They are also cushioned by diversity. Advertising might be slumping on Tencent’s WeChat network, but its video-gaming franchise surged during quarantines. Alibaba can offset slumping consumer spending with rising demand for its cloud services.”

The technology race between the U.S. and China can be linked directly to the amount of business investment that each nation receives. The U.S., at one point, stood head and shoulders above its rival, but that gap is now narrowing, which would make way for gains in China-focused technology ETFs.

“Chinese tech also faces a potent, if indirect, external threat in darkening relations between Washington and Beijing, which are blaming each other for the Covid devastation and preparing for a sharpened rivalry,” according to Barron’s.

Still, there’s no denying that many Chinese internet and technology companies are more attractively valued than their U.S. counterparts while sporting equal or superior growth rates.