Investors: Here’s What You Need to Know If Trump Bans TikTok

It’s the hottest social media platform on the planet. It’s growing faster than Facebook (FB), Twitter (TWTR), and Instagram. And it could come crashing down any day now.

In short, TikTok is a video sharing app where users can create short dance, lip-sync, comedy, and talent videos.

And Right Now, Millions Of Young Americans Are Hooked

In the first quarter of 2020, there was a total of 315 million downloads worldwide—a 58% increase from the previous quarter and the most to date. Currently, TikTok has 800 million users worldwide, and an estimated 80 million users in the US.

And get this: TikTok has only been available in the US since 2018! These days, young people in the US now spend almost as much time on TikTok as they do watching videos on YouTube.

But as I said, this addictive app could soon be gone for good. You see, not only is it insanely popular, It’s also highly controversial. In fact, Trump and his administration are looking into banning it. Not months from now, but weeks.

And when he does, it could send one specific stock to the moon. Let me explain.

It’s owned by the Chinese parent company ByteDance which, thanks to TikTok, is worth a whopping $75 billion. It’s the world’s most valuable private company, according to CB Insights. When companies get this big, they attract criticism, especially Chinese companies.

You see, it’s no secret that the US government and China aren’t on the best terms. Trump’s been waging a trade war on China since he stepped into the Oval Office.

The Chinese Communist Party is also infamous for stealing intellectual property. And, as a social media app, TikTok has mountains of personal data to collect on its users.

Now, TikTok Is Doing Everything It Can To Distance Itself From The Chinese Government

In May, it hired American and former Disney executive Kevin Mayer as CEO. It also says it’s “never provided user data to the Chinese government, nor would we do so if asked.”

Still, many cybersecurity experts fear that the private data of American users could end up in the hands of China’s Communist Party. There are even reports that TikTok can read anything and everything on users’ Apple (AAPL) iPhone devices. That includes passwords, work documents, sensitive emails, and financial information!

Wells Fargo (WFC)—one of the nation’s biggest banks—has banned its employees from using it. The US Army and Navy have also barred service members from using the app on government phones, after the Pentagon issued a warning.

Earlier This Month, Trump Called Out TikTok By Name

He said his administration is now considering banning the app. That same week, US Secretary of State Mike Pompeo called TikTok a “national security” threat.

Pompeo also said that the administration was “certainly looking at” banning the app. And the Trump administration is now running ad campaigns asking for support of a TikTok ban. 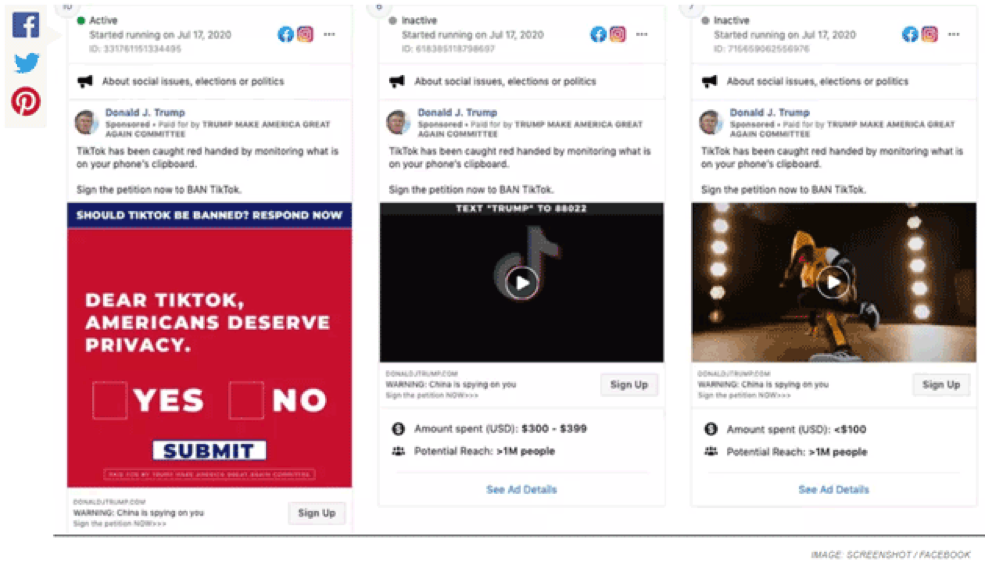 Now, it’s too early to tell if Trump will ban TikTok outright. But it wouldn’t surprise me at all if he does.

The White House has already said that restrictions on TikTok could come in “weeks, not months.” The US wouldn’t even be the first country to ban TikTok.

Last month, India banned TikTok along with 59 other Chinese apps due to an ongoing border clash with China. India was an even bigger TikTok market than the US. It accounted for 30% of all TikTok downloads!

If Trump Does Clamp Down On TikTok, That Will Cause One US Stock To Soar

I’m talking about Snap (SNAP). Snap is the biggest US social media company after Facebook. It owns the wildly popular app, Snapchat.

Like TikTok, Snapchat is a hit with the kids. About 90% of 13- to 24-year-olds in the US use Snapchat. To put that in perspective, just 39% of young folks use Facebook.

Snap is also at the forefront of the augmented reality (AR) megatrend. Snap could explode higher if Trump bans TikTok. And I’m clearly not the only investor who thinks so. On July 8, Snap spiked 6% on talk of a TikTok ban.

To be fair, Snap isn’t the exact same experience as TikTok. But it could offer something eerily similar soon. You see, Snapchat is currently recreating the TikTok experience on its platform. According to TechCrunch, Snapchat has begun experimenting with a vertical swiping motion that mimics how TikTok works.

This tells me Snapchat is looking to fill the huge void that will come from a TikTok ban. But that’s not the only reason for you to consider investing in SNAP. The stock is also emerging from a monster base that it’s been carving out since it went public three years ago.

It’s now close to eclipsing its IPO-day high. A breakout at this key level would represent a massive change in character for the stock. And it could signal the beginning of a major long-term rally for SNAP.

In closing, SNAP looks like it’s on the cusp of a major move higher. And a TikTok ban by Trump could be the catalyst that sends this stock through the roof.