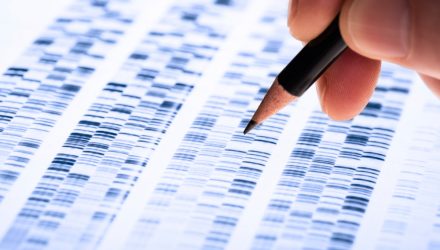 Another Interesting Week for the Genomics ETF

There are rarely dull moments with the ARK Genomic Revolution Multi-Sector Fund (CBOE: ARKG) and most of the time, that’s a positive trait. That was the case for some of the exchange traded fund’s components last week.

It’s not uncommon for ARKG components to notch sizable intraday gains and that theme was on display last week.

“Evogene (EVGN), a computational biology company, traded down approximately 16% on Wednesday after a strong run last week, and then up 25.9% on Friday perhaps because its recent round of funding attracted investor interest,” according to ARK Invest.

ARKG is soaring this year “even though many of its components aren’t directly engaged in the fight against Covid-19. That’s an encouraging sign because it indicates ARKG can be rewarding after the virus is defeated,” reports InvestorPlace.

Evogene, one of ARKG’s smaller components, wasn’t the only big winner on the ETF’s roster last week.

“Shares of Exact Sciences (EXAS), a molecular diagnostics company focused on cancer screening, rose nearly 27% on Thursday after it presented new data on the progress of its multi-cancer liquid biopsy test,” notes ARK Invest. “The preliminary data showed an 83% sensitivity (true-positive rate) at 95% specificity (true-negative rate). While the early data are promising, we believe that, in multi-cancer test development, Exact lags behind companies such as Thrive Earlier Detection, Freenome, and GRAIL. That said, once the test catches up with the competition, we believe Exact should be able to leverage its existing product leadership and diagnostic infrastructure to become a formidable force in the early detection of multiple cancers.”

Genomic funds are some of the shining stars in the collection of stellar health care ETF performers. At the start of the year, the genomics industry was already on a rapid trajectory with lower gene sequencing costs aiding the long-term benefits for related investments.

Underscoring ARKG’s opportunity set and its increasing popularity with advisors, the fund has added more than $1 billion in new assets this year.