You are at:Home»Disruptive Technology Channel»Growth Is Gaining Steam, Could Beat Value Into Year-End 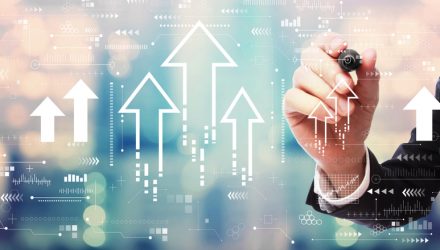 Growth Is Gaining Steam, Could Beat Value Into Year-End

Growth investors, look now, because growth stocks are perking up in a big way, prompting some market observers to say that growth will beat value by a wide margin into year-end.

Over the past month, the S&P 500 Growth Index is up 10.62%, more than doubling the returns of its value counterpart. That’s good news for disruptive growth exchange traded funds, including the ARK Innovation ETF (NYSEArca: ARKK). Indicating that it’s indeed responsive to upside generated by growth fare, ARKK is higher by almost 15% over the past month.

The actively managed ARKK is close to erasing its modest year-to-date loss and could be on the cusp of more upside for the remainder of 2021.

What’s impressive about the recent strength of ARKK is that it’s coincided with some upside for 10-year Treasury yields — a scenario that not only hampered growth assets earlier this year, but that is also typically conducive to success for value equities and funds.

“We’ll start to see supply chain disruptions settle down. We think the optics around inflation ratings year-over-year is going to settle down,” PNC’s Agati told CNBC. “The consensus thinks that inflation is going to run so red hot that it’s going to force the Fed’s hand to both taper and raise rates earlier in 2022. We just don’t see that.”

The PNC strategist points to recent strength in the Nasdaq-100 Index (NDX) and an increasingly attractive fundamental picture for members of that widely followed benchmark. That’s relevant to ARKK because several of the fund’s 45 holdings are members of that index, and several others, including Coinbase (NASDAQ:COIN) and DraftKings (NASDAQ:DKNG), could be added to NDX when it rebalances next month.

On that note, it should be noted that ARKK is not a dedicated tech ETF. Its allocation to that sector is 31.1% as of the end of the third quarter. However, that’s overweight relative to the S&P 500, and that allocation coupled with a 17.4% weight to the communication services sector could help ARKK prove sturdy if inflation lingers into 2022.