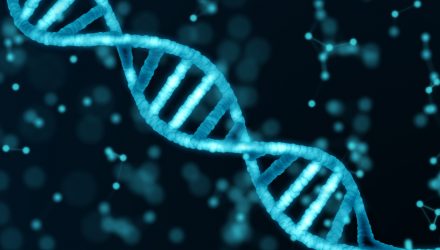 Google and Genomics? It’s a More Plausible Mix Than Meets the Eye

Many investors know Google parent Alphabet (NASDAQ:GOOG) as the dominant name in internet search, the company behind the Android mobile operating system, and a rising force in cloud computing.

However, most investors don’t think of Google and healthcare together, and they certainly think of Google and genomics. Perhaps they should reconfigure that thinking; Google has genomics inroads, and that could eventually have implications for exchange traded funds such as the ARK Genomic Revolution Multi-Sector Fund (CBOE: ARKG).

“DeepMind, an AI research subsidiary within Google (GOOGL), has released a powerful software tool called Enformer that could impact the field of genetics profoundly. Enformer uses data from DNA sequencing to predict levels of gene expression,” according to ARK Invest research. “Recall that DNA is transcribed, or expressed, as RNA before eventually becoming protein. Scientists want to understand how DNA mutations occurring close to and far away from different genes alter the expression of RNA inside a cell.”

Currently, Alphabet is not a member of the ARKG lineup, but the fund is actively managed, indicating that it has ample holdings-level flexibility. Plus, ARKG has an established history of including more than just pure genomics stocks. For example, telehealth giant Teledoc (NYSE:TDOC) is the ETF’s top holding at a weight of nearly 8%, and blue-chip pharmaceuticals stock Pfizer (NYSE:PFE) is also among the ETF’s holdings.

“Many state-of-the-art tools for predicting gene expression, such as Basenji2, are based on convolutional neural networks (CNNs) which struggle to incorporate information from distant regions in the genome,” adds ARK Invest. “Enformer uses a modified transformer architecture that leverages natural language processing (NLP) principles and has a field of view five times larger than that of Basenji2. As a result, it has improved the prediction of gene expression one third of the way towards ‘experimental ground truth.’”

Whether Google makes its way into the ARKG lineup remains to be seen, but it’s clear that this is a healthcare ETF with deep technology ties, and that could be compelling for long-term investors.