You are at:Home»Disruptive Technology Channel»Fintech Is Where the Disruption Is At 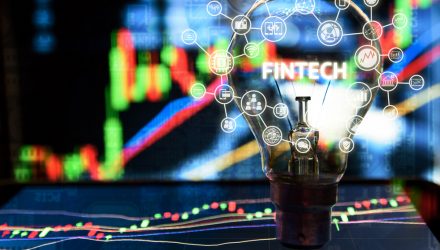 Fintech Is Where the Disruption Is At

Plenty of emerging industries and companies credibly lay claim to being disruptive, but fintech is one of the leaders on this front.

That’s one reason the ARK Fintech Innovation ETF (NYSEARCA: ARKF) is increasingly a favorite among investors. The actively managed exchange traded fund is up more than 46% over the past year, and with the adoption of fintech technologies taking off by the day, that performance could be just a starting point for ARKF.

The often-cited thesis for fintech, one that remains true today, is that these companies, including ARKF, are disrupting the traditional financial services model, potentially putting old guard banks and brokerage firms, among others, at risk. In fact, some experts argue that the business of money is perhaps the ripest for disruption.

“Let’s start with this: 25% of U.S. households are either unbanked or underbanked. Half of the nation’s unbanked households say they don’t have enough money to meet the minimum balance requirements. 34% say bank fees are too high,” writes NYU Professor Scott Galloway on Medium. “And, if you’re trying to get a mortgage, you’d better hope the house isn’t cheap.”

Those platforms allow those companies to not only provide an essential financial service to customers, but it can pave the way for those customers to embrace other services, including buying and selling stocks and cryptocurrency. Additionally, surveys indicate consumers have more favorable views of digital wallets than they do old school banks. That is to say, a Cash App or Venmo customer is likely to be sticky.

Of course, a bet on fintech is a bet on innovation. As NYU’s Galloway notes, PayPal and Square have been awarded nearly 2,000 patents combined over the past five years. Alone, PayPal was issued 26 times as many patients during that span as Goldman Sachs, he said.

Fintech is relevant today for another reason: It plays a vital role in reducing financial discrimination. Data confirm as much.

“NYU Professor of Finance Sabrina Howell’s research found fintech lenders gave 18% of PPP loans to Black-owned businesses, while small to medium-sized banks provided just 2%. Among all loans to Black-owned firms, Professor Howell found that 54% were from fintech startups. Racial discrimination is the most likely explanation, as lenders faced zero credit risk,” according to Galloway.