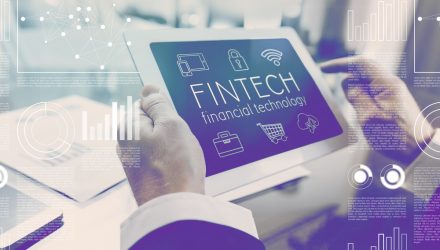 Exchange traded fund investors who are seeking a growth opportunity in a rapidly changing market can consider the up-and-coming financial technology industry.

In the recent webcast, The Future of Finance: How Fintech Could Disrupt Everything, George Whitridge, Analyst, ARK Invest, highlighted the future of finance through digitized transactions and lending. For instance, he noted that in 2005, roughly 7 million existing homes sold while roughly 5 million existing homes were sold last year. Consequently, AKR Invest believes the residential real estate market is illiquid and that the cost to transact must fall in order to increase sales volumes.

Meanwhile, real estate agents earned an estimated $100 billion in commissions in 2019. There is an opportunity here for innovative solutions to cut costs and make this market more streamlined. Specifically, Whitridge argued that the internet enables compression of real estate commissions. Online real estate platforms such as Redfin and Zillow could compress these commissions. These companies could also benefit from the rise of digital notarizations.

Additionally, Whitridge highlighted financial technology or fintech’s ability to facilitate equitable stimulus as the government tries to funnel billions of dollars to small business through the Paycheck Protection Program, or PPP. Banks were responsible for the majority of the $350 billion lent in the first tranche of the Paycheck Protection Program. In the second tranche of PPP funding, Square and PayPal appear to more easily and equitably allow businesses to apply for and disburse funds to small businesses across the U.S.

Maximilian Friedrich, an Analyst for ARK Invest, also underscored the value of digital wallets in the future of finance. For instance, in China, Mobile Payments are now 2.5 times the size of China’s gross domestic product. Third-party mobile payment transactions in China grew to nearly 250% in 2019 from 10% of GDP in 2014, compounding at a 107% annual growth rate.

“In ARK’s view, global mobile payments will be a multiple of today’s $87 trillion in global GDP,” Friedrich said.

Investors may also have a chance to get in on this nascent growth opportunity. Friedrich argued that digital wallets are valued at a discount to banks. Public markets are valuing digital wallets, such as Square’s Cash App, at a significant discount per user to private fintech valuations.

“ARK believes that, at maturity, a digital wallet user should be valued at roughly $3,650, similar to a retail bank customer,” Friedrich said.

As digital wallets take up a bigger slice of the pie, innovative fintech companies could begin to leave banks behind. Fintech companies like Lending Club and Sofi captured 39% of the unsecured consumer loan market. According to ARK’s research, digital wallets should reduce the amount of revolving credit card debt sitting on bank balance sheets to $483 billion by 2028 from $740 billion in 2018. Consequently, interest income on banks’ credit cards could be cut in half during the next five to ten years.

To help investors capture the fintech innovation, ARK Invest has come out with the ARK Fintech Innovation ETF (ARKF). Matt Murphy, Vice President, National ETF Sales, Resolute Investment Managers, argued that investors should consider something like ARKF because of its exposure to innovation, growth potential, a tool for diversification, a strategy grounded in research, and its cost-effective ETF structure.

Murphy believes that ARK’s Fintech Innovation ETF focuses on innovations that are revolutionizing the financial industry. Regulatory changes have shifted the economics of intermediating capital, re-configuring the value-chain, and allowing exploitation by competitors. Meanwhile, technology is changing the ability of financial institutions to assess risk, interact with customers, and facilitate transactions.

Financial advisors who are interested in learning more about the financial technology segment can watch the webcast here on demand.